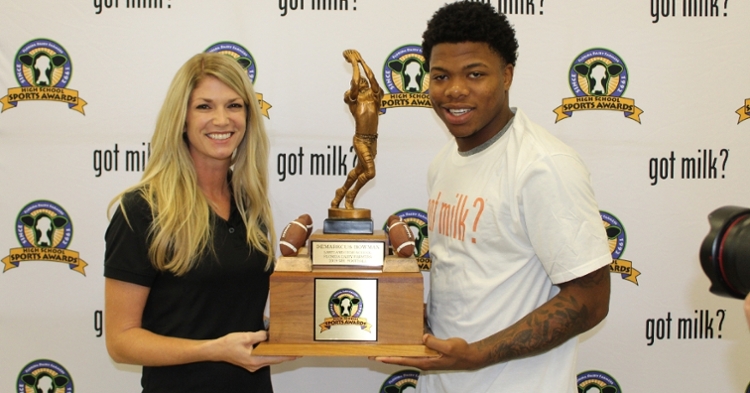 Demarkcus Bowman is headed to Clemson, a program that’s built to last.

Bowman was named the 2019 Florida Dairy Farmers Mr. Football by the narrowest margin in the 28-year history of the award following a final round of voting by a statewide panel of high school football coaches and media representatives in December. Bowman received the award last week in a ceremony at his school.

He was quick to praise his teammates and his coaches.

During his three-year varsity career, he compiled 5,081 yards rushing on 446 carries (11.4 yards per carry) and scored 70 touchdowns. Bowman edged Henry Parrish Jr. of Miami Columbus High School in the voting, garnering 12 of the 27 first-place votes to finish with 187 points. Parrish Jr., the Class 8A POY, received 10 first-place votes and finished with 172 points.

Bowman joins a list of past winners that includes Travis Henry, Derrick Henry, and Dalvin Cook.

“It feels good because all of them were great backs and great athletes,” Bowman said.

Bowman committed to Clemson last spring and will enroll in school for the first summer session. Lakeland has long been a pipeline to the University of Florida, but Bowman went his own direction and signed with the Tigers, a program he feels will always be in the national conversation.

“I am very excited. There was a lot (that went into it) to make that decision,” Bowman said. “I am ready to get up there and go to work. Clemson is built to last. They will be back every year. I want to leave with a degree, a Heisman Trophy winner, and a National Championship. What excites me the most is just being able to go to school here and get my degree.”

“He is special. He is another version of CJ Spiller,” Swinney said. “When I first put my eyes on him that I what I thought of him. Now he is a long way away from that, but as far as explosiveness and track speed, the ability to catch the football. Every time he touches it he can go the distance. He can return and those types of things. I think there are a lot of similarities between the two coming out of high school. He is a little thicker than C.J. was, but he has that type of explosiveness and it’s easy to see coming out of the system he played in.”