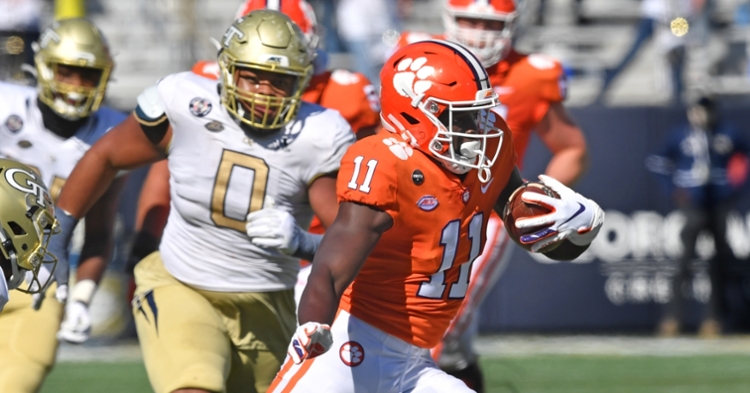 Ajou Ajou grew up in Brooks, Alberta, a small community that is known for its farming, energy sector, and meatpacking and processing plants. It sits not quite halfway between Calgary and Medicine Hat and has a population roughly the same size as a place in South Carolina named Clemson.

Ajou’s family hails from Sudan and he was born in Calgary. Immigrants into that part of Canada find jobs working in the meatpacking plants. His parents work for JBS Canada, a beef supplier with 2600 employees spread across Canada, and he grew up understanding the meaning of hard work. He also grew up wondering what else was out there in the wide world beyond Brooks, a place that he says is “boring” and doesn’t have a shopping mall.

He feels blessed to be a part of the Clemson experience.

“It's crazy, for sure. Coming from Brooks, I am really just super thankful,” Ajou said in his first meeting with the Clemson media Monday. “You can't ask for much more than this. Brooks is very boring. We don't have much. We don't have a mall. We kind of play sports to keep us busy.”

In an effort to increase his visibility, Ajou moved to Florida and played at Clearwater International Academy for his senior season.

“I moved to Florida last year on February 28th of last year and it was great. It taught me a lot,” he said. “Just meeting new people and finally playing American football, where you don't get the 10-yard head start. It was awesome.”

A visit to head coach Dabo Swinney’s high school camp in June of 2019 opened Ajou’s eyes to the possibilities of attending Clemson.

“When you are driving into Clemson - we took the backroads - it was country and farms, and I was like, 'Wow, this is kind of looking like Brooks, my hometown,'" he said. "It wasn't even the school really, like yes, the school, but just the people. I heard the population here is 14,000 and Brooks population is 14,000. So, I'm like you really can't make this up, and I was just connecting the dots really. Everyone's nice, everyone just wants to see you grow and win. It's kind of like Brooks in a sense because it takes a village to raise a child. Just the coaches and the way they help me and make sure I'm good, in anything. I just love that.”

It didn’t take long for the Clemson coaching staff to recognize the raw potential in the recruit from a small town in Canada and make an offer. Ajou wanted to give an answer to Swinney on the spot, but took Swinney’s advice and took his time and committed in late July.

"The moment he (Dabo Swinney) offered me, I wanted to say yeah I'm committed," Ajou said. But he said, 'I don't want you to commit now I want you to go look at your options, you're still new to this.' But I already knew definitely that I was coming here."

Ajou is still learning the game and learning to play the position and has caught two passes this season for 41 yards. One of those was a 35-yard touchdown reception against Georgia Tech that showed off his incredible athletic ability.

'I catch the ball and I look and I'm like 'Oh man, this is really happening,'" Ajou said. "I just got so much adrenaline and then everything is just like it's tunnel vision just getting to the end zone really. I was like hitting my moves and I started running. And I finally get there and I just hear the crowd erupt and I'm like, 'no way.' It was just blurry. I was speechless until I got to the bench. I didn’t have anything to say. I was just screaming and my teammates were going crazy. It was just awesome.”

Ajou was asked by a member of the Canadian media what it was like to play at Clemson – and for Swinney – and he said his experience has been so positive he wanted the Canadian reporters to come for a visit.

“It's what I wanted to happen, but I can't say I expected it. I always wanted this to happen. It is really amazing,” Ajou said. “You guys have to come visit after this corona stuff because this place is really amazing. I haven't played in front of 80,000 fans, but just playing in front of 19,000, I am like, 'Wow, this is great.' And in the practices, they push you to your limit and they want the best out of you, and they really put school first. You are a student before you are an athlete. I really like that, because after football, what is going to happen? And they really emphasize that."

Freshman WR Ajou Ajou, from Brooks, Alberta in Canada, feels like he’s at home in #Clemson for a number of reasons.

Clemson debuts at No. 22 in ESPN 2022 recruiting rankings
Post your comments!