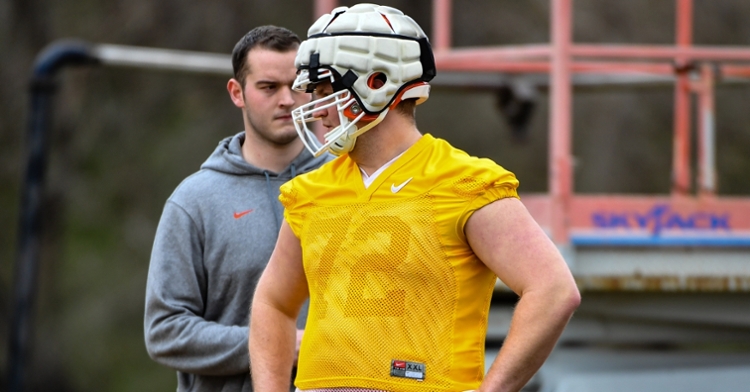 Blake Vinson was in yellow a lot last spring.

CLEMSON – Players who aren’t participating in a Clemson football practice -- but are still able to walk -- typically don a yellow jersey and shorts and spend the majority of practice training with strength and conditioning coach Larry Greenlee. There will be a lot of yellow this spring.

Head coach Dabo Swinney met with the media prior to the start of the Tigers’ 2021 spring practice Wednesday, and he detailed that defensive end Justin Foster (asthma/COVID) and offensive lineman Blake Vinson (leg) have decided to give up football.

"Vinson is going to take a medical, but he is going to stay and student-coach," Swinney said. "Blake has been battling. It's a shame, but that's football. You wonder why guys can't get over the hump from an injury standpoint. He's a great teammate. He's going to finish up his Master's degree.

"Justin graduated back in December. He's got some really exciting career work opportunities that he's really interested in and he really wants to get started on. Tried to talk him out of it, but he had a very tough fall. COVID was a very tough thing for him. He has always battled asthma and allergies. When he got COVID last summer, that really set him back. He's way better than he was last August but he's still kind working through that. Was hoping he would continue through that process and come back next year. But if you know Justin, he's a brilliant young man. He has a lot of interests and he's very talented and he knows exactly what he wants to do. He's graduated. He really wants to take this next step."

There are also a lot of players who will be limited this spring.

“From an injury standpoint, (wide receiver) Justyn Ross will be back (this spring)," Swinney said. "Excited to see him back out there. We aren't going to let him have any contact, or live, or scrimmage or anything like that this spring. But he will be in our normal practice mode and getting in some team separate periods. He still has another big appointment coming up in March but he will be practicing in a limited basis.

"(Defensive end) K.J. Henry, (safety) Lannden Zanders, (linebacker) Baylon Spector, and (defensive tackle) Etinosa Reuben will definitely be out for the spring with various postseason surgery type things. (Defensive tackle) DeMonte Capehart also had a procedure that's probably going to limit him at least the first half of spring. (Offensive lineman) Matt Bockhorst is doing great -- we had to do a little clean-up surgery on him. Bockhorst will practice but on a limited basis. Same with (tight end) Davis Allen. Both of those guys will be limited. Other than that, the expectation is for everyone to be in practice.

"Obviously there is still a virus out there. It's still part of our world. We have a few players that will be out this week after testing positive and few others out due to close contact."

One player who should be a full go in practice is freshman defensive tackle Tré Williams. The former 4-star battled injuries last season but should battle for playing time this spring.

“Tré was able to do play a couple of games but he was out the rest of the year," Swinney said. "We went ahead and did his surgery because we really wanted to get him back for spring practice. He's going to be out there today. Let me tell you, Tré Williams, I saw enough of him to see his natural ability. He's still got a lot to learn, but he is a high-level talent at d-tackle. A lot of natural stuff. He's twitchy, explosive, incredibly athletic for his size, he's smart. I think he's going to be a guy that we are talking about for a long time around here."