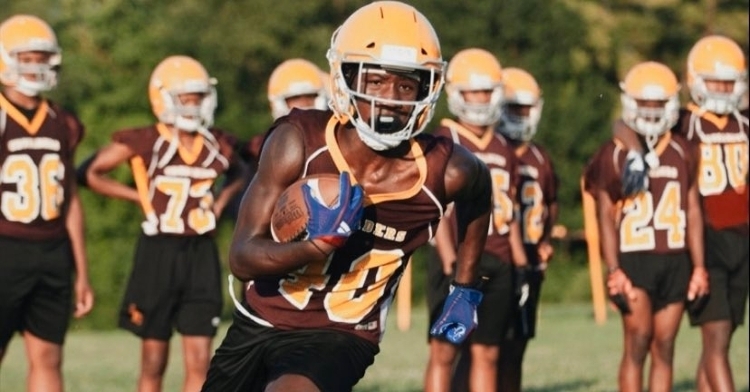 One of the Tigers' top prospects in the 2022 recruiting cycle made another trip to Clemson this past weekend for the annual spring game, and like many other recruits over the years he felt like part of the family.

Clemson has moved quickly up the board with CB Toriano Pride (5-11 172) of St. Louis since offering him a few months ago. He made his second visit to campus Saturday — this time with his family — to take in the spring game. Clemson is right in the mix with Georgia, Ohio State, and Alabama. The weekend visit was another positive checkmark for the Tigers.

“It went really good. I loved the atmosphere and all the people treated me like family, some of the other recruits and commits, that felt really good,” Pride said. “I loved the weather down there. They looked really good for their spring game, they played well. I just got to build a lot of relationships with some of the commits and recruits.”

Pride first visited Clemson in February with his seven-on-seven team which had played in Myrtle Beach. On that trip he got to walk around the campus but, of course, couldn’t go inside the athletic facilities, including Death Valley, due to the NCAA Dead Period. So, Saturday was the first time in person he’s gotten to see where the Tigers play.

“It was live. I didn’t know the stadium was that big,” Pride said. “I was just really surprised. I didn’t think it was that big on TV. That was a big surprise.”

Again, with the dead period still in place, Pride wasn’t allowed to meet with any of the Clemson coaches. But they knew he was there. Corners coach Mike Reed has built a strong relationship with Pride and no doubt this visit enhanced Clemson’s position with him.

“That’s the only school I’ve seen right now, so I’m going to say yeah as of right now,” Pride said. “Clemson is in a really good spot with me. I’ve built a lot of relationships with current players, so I got to see it from the perspective of people on the team.”

Pride said he will return to Clemson for a third time for their Elite Retreat weekend on June 11th. Again, that will be a personal visit for him. He has an official visit set with Ohio State the weekend prior. He also plans to set visits with Alabama and Georgia.