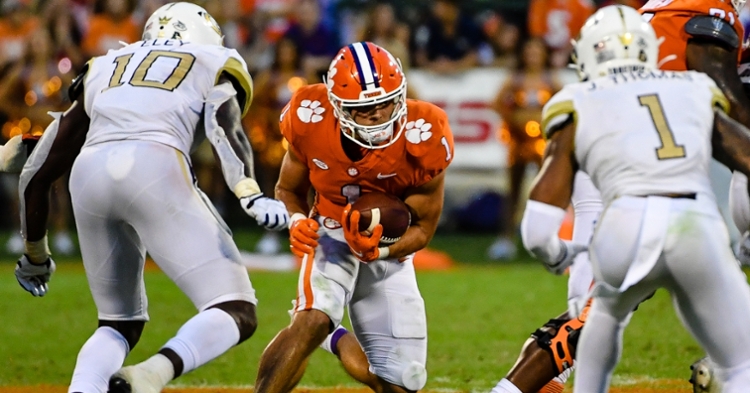 Swinney said that freshman running back Will Shipley is a gametime decision.

CLEMSON – A violation of team rules led to the latest transfer and more notes from Wednesday’s practice.

TigerNet learned Tuesday that running back Michel Dukes intended to enter the transfer portal, and head coach Dabo Swinney said that Dukes broke team rules and decided to transfer instead of facing the consequences.

Swinney, speaking to the media following the practice, said they had a team issue with Dukes this week and Dukes felt like it was time for him to move on. They wish him nothing but the best. He is one of the best athletes on the team, but it takes more than that. Swinney said it was a team rules issue and there were going to be consequences with that, and Dukes decided to move on.

Clemson plays at Pitt Saturday at 3:30 pm (ESPN). The Panthers are 5-1 overall and atop the Coastal Division with a 2-0 ACC mark. Pitt looks to achieve its first 6-1 start and 3-0 conference record since 2015, Pat Narduzzi's initial season as head coach.

The Tigers, ranked No. 24 in the USA Today Coaches Poll, make their first visit to Pittsburgh. Two prior regular-season meetings were played in Death Valley. The teams twice met at neutral postseason sites

*On where Pitt has improved defensively as the season has progressed, Swinney says they don’t do a lot of things but what they do they do very well. They do a good job inside in the run game. They gave up a few plays against Western Michigan, but you can see they learned from that. They were having some issues with their eyes and missed some tackles. A very physical group.

*Said the depth is being tested. Running back Will Shipley looks “better than anticipated” and will be a gametime decision.

*On freshman receiver Troy Stellato, he has learned a lot and isn’t playing because they don’t want him to play. He is free to play. His focus is better, and he is maturing and he will make the trip to Pittsburgh and be ready to go if they decide to play him.

*Asked about stopping the run, Swinney said the two backs at Pitt will hurt you even though they are a pass-first team. But Swinney says they will put the ball in the hands of Kenny Pickett and they have to stop the bass or it will be a long day.

*The biggest thing that Pitt does with the wide receivers is feature No. 3 (Jordan Addison). Pitt has a QB that the game is slow for. When he scrambles it leads to a big play in the passing game because he can throw on the run. All of the receivers are good, and the tight end is good. They spread it out to everybody. You have to know where Addison is and have a plan for him.

*The Tigers have been able to get pressure because of what they have done on the edge with Myles Murphy and Xavier Thomas.

*The wide receivers have had a good week and now need to take it to gameday and make the layups. They are not doing the routine stuff very well and he hopes this is the week it turns for them.

*On being an underdog in an ACC game, Swinney said he isn’t worried about that.

*Sounds like all six cornerbacks are healthy and will be ready to go this week, including Andrew Booth and Fred Davis.

*Swinney on DJ Uiagalelei’s struggles, he says Uiagalelei was better last year because they were better around him. They are in transition around him and while he hasn’t been perfect, he has gotten better. But there have been a lot of people around him who are going through some growing pains. Uiagalelei has worked through some things. They had continuity up front up front last year (no depth) and this year they have depth (and no continuity). When Trevor Lawrence showed up, it was a veteran offensive line and veteran receivers and continuity around the quarterback. It was a championship roster. But when all is said and done Uiagalelei will be fine. Every quarterback has had some growing pains and that is part of it.

*Tight end Braden Galloway has been back at practice all week.