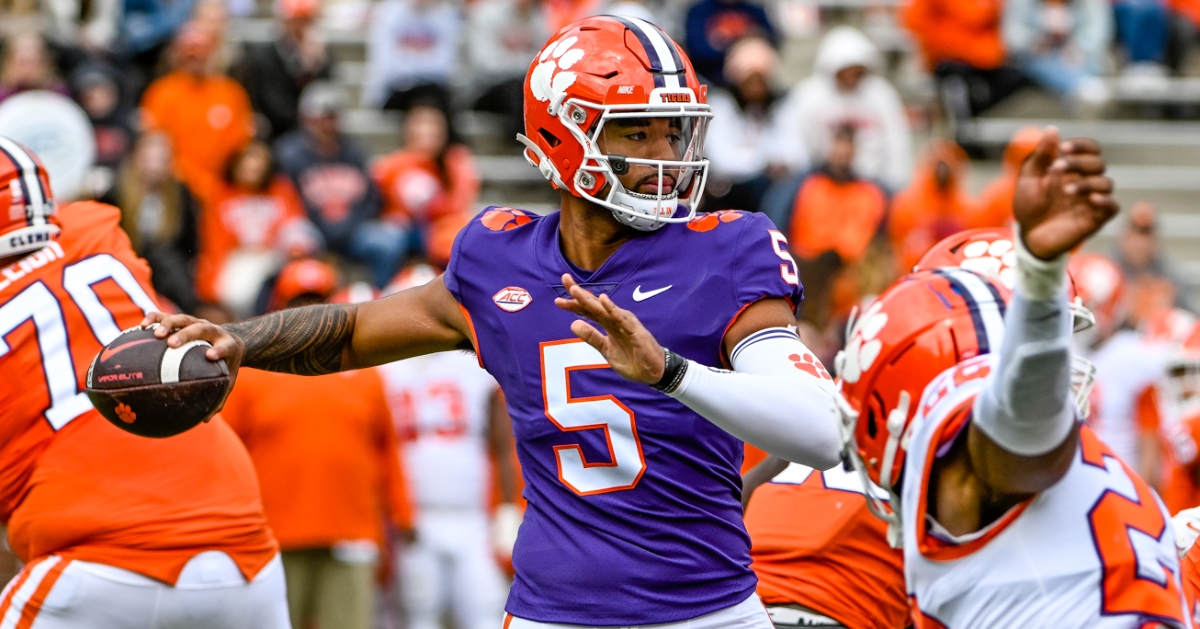 Uiagalelei looks for a receiver during the game.

CLEMSON – Clemson head coach Dabo Swinney said that Saturday’s Orange and White Game was about more than the final score or stats, it was about evaluating the players who could play on what he termed a very “incomplete” team.

“Enjoyed the game. I thought we got done what we needed to get done. We saw the guys we needed to see and got them some experience,” Swinney said during his postgame press conference. “I really appreciate our fans creating a good environment for us. We don't get this opportunity very often. We don't get the chance to create a preseason atmosphere or anything like that, so to be able to come out here and expose some of these kids. The best thing is to be exposed and gain experience and we had some guys get that today. It was tough conditions but a lot of fun.

“A lot of fun to see them handle their business and finish in a good way. We have a lot to do, and first and foremost is getting people healthy. We obviously didn't have a lot of guys out there playing today but we made it work. We put 11 out there so we could get everyone evaluated that could play. But a very incomplete team today. But when we get back in August, we have a chance to be a very good football team if we do what we need to do this summer. Proud of the guys. Proud of the work.” 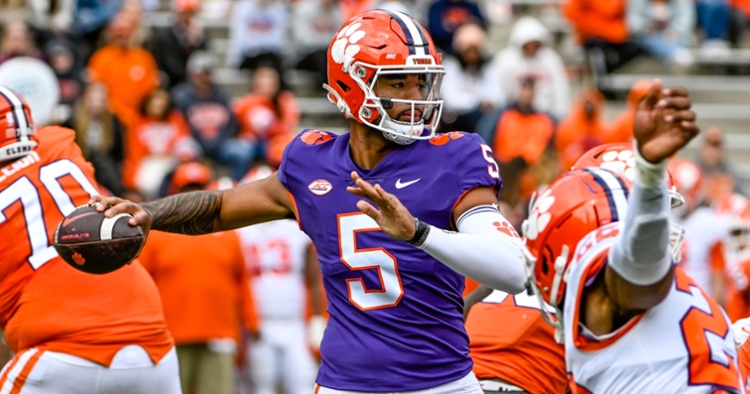 Uiagalelei looks for a receiver during the game."

Quarterback DJ Uiagalelei was inconsistent, finishing 17-for-36 for 175 yards with an interception, but Swinney said Uiagalelei is definitely the starter heading into the summer.

“He’s had a great spring,” Swinney said of Uiagalelei. “He’s not done anything to not be the starter. Cade is a really talented player. We’ve got two guys that I think can win at a high level just like when Trevor (Lawrence) and D.J. were coming out of the spring (in 2020). It’s not often that you can say that, but I’ve seen enough from both of those guys to know that.”

Swinney likes what he sees out of all of his quarterbacks.

"Oh yeah I rest real easy on that position. I love the guys we have there,” Swinney said. “This is as good a room at quarterback as we've had in a long time once we get everybody here. We are going to have a lot of functional guys in that room.

"D.J. had a good spring and did what he needed to do to give himself some momentum going into summer. Same thing with Cade Klubnik."