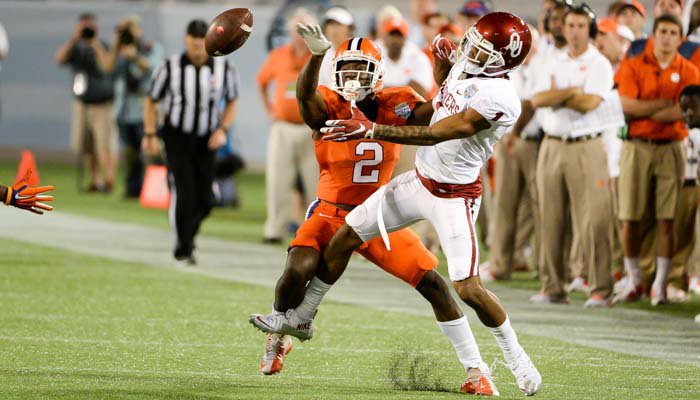 CLEMSON - The Clemson defense lost several key pieces off of last year's team, including leaders in the secondary in Robert Smith

The good news, however, is that the Tigers return stalwarts Jayron Kearse

Kearse told the media earlier in the spring that despite losing two key components, he feels good about where the secondary is heading into the final part of spring practice.

"I'm feeling really good, especially after today because we went out there and dominated," Kearse said recently. "Everybody is gelling together and we're looking good. I definitely feel good."

"It was at first but playing with Jadar is just as good as playing with Robert," Kearse said. "The communication is good with me and Jadar. It can get better but it's coming together. We're going through everything but it's just like Robert is still back there. There's not a drop-off with Jadar. We're doing the same things that Robert and me were doing."

Korrin Wiggins
Jr. Defensive Back
#12 5-11, 195
Durham, NC
View Full Profile , who has played mostly at the Nickel/SAM spot, is also being given a shot at the vacant safety spot.

"You've got guys like Korrin [Wiggins] who's coming back from the nickel position to the safety position," Kearse said. "Everybody that is running with the ones, twos and threes - we're out there competing. We're just trying to get everyone comfortable, so if one person goes down the next person can step right up and take it from there."

Mackensie Alexander has already locked up one of the cornerback spots and Kearse said that the redshirt sophomore is picking up right where he left off.

"Having a guy that can shut down one side of the field helps your defense out," Kearse said. "He's just out there battling. He had a nice competition with him and Mike Williams

Mike Williams
Jr. Wide Receiver
#7 6-4, 210
Vance, SC
View Full Profile . He and Artavis [Scott] have been going at it. It has been a very competitive spring since we started from day one."

At the other corner spot, Kearse said there is a battle brewing amongst several of the younger players.

"We have a lot of guys out there competing," he said. "You have guys like Cordrea [Tankersley], Ryan Carter

Ryan Carter
RS So. Cornerback
#31 5-9, 180
Grayson, GA
View Full Profile . He was a guy that was way back and now Ryan Carter is really stepping up and making plays for us. I'm proud to see him making plays like that, because he came in with me. Just that bond that we have, seeing him go out there and make plays, I'm very proud of him."

There will be plenty of time to iron out the depth chart, but Kearse said one of the main things that will help the secondary the most in their preparation for August is having to face Clemson's wide receiver corps day in and day out.

"We're battling. Our receivers are challenging us and we're challenging them," Kearse said. "That's how we make each other better. Iron sharpens iron. They're making us better and we're making them better. They're critiquing us and we're critiquing them. By the time game time comes and we get into the season it will be easier for us because we know things that can tip the defense off and they'll know things that can tip the offense off, because we're helping each other."