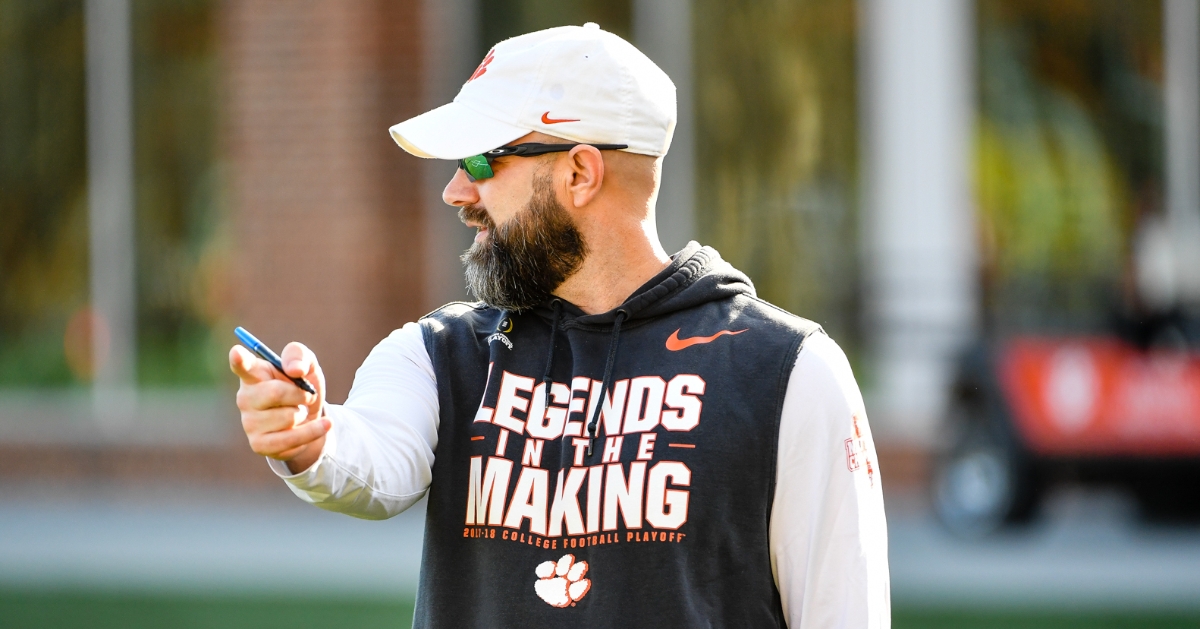 Clemson's coaches have streamlined the offense this year.

CLEMSON – Passing game coordinator Kyle Richardson sat down with offensive coordinator Brandon Streeter in the offseason with the idea that they would clean up the Clemson offense. Not change it, not entirely, but clean it up.

Richardson, who also serves as the team's tight ends coach, met with the media last week in the PAW Bistro, and he said that taking Chad Morris’ offense and adding some wrinkles from Jeff Scott and Tony Elliott might have caused it to lag in spots.

"We didn't want to throw the offense away or design a new offense. Our offense has been great,” Richardson told the media. “Did we fall on some hard times last year? Yeah. We have to get better. I think at times when Chad Morris was here, then Jeff and Tony taking it, then Tony, it can kind of become a hodgepodge because everybody is bringing new ideas to the table, and they kind of dump on top of each other.

“So Streeter and I sat down, and it was like, alright, what direction do we want to go now? We decided to clean up some things. Let's look at things that we don't do anymore, or haven't done in years is probably the better way to say it, and let's put them to the side and let's really get a core group of passing concepts that we do a bunch or that we need to do more. And let's really focus on that and find ways to make those better.”

In many ways, the offense is now simpler with a focus on post-snap adjustments that will allow the Tigers to play faster.

“Our offense hasn't changed; our passing game hasn't changed. Have we tweaked some things in core concepts? Yeah. I think by simplifying things, we've been able to play faster,” Richardson said. “As in, think faster pre-snap and think faster post-snap, and if we do that, then we can give them some more things to do post-snap in the route to try to take advantage of some grass that maybe we haven't been able to in the past.”

Richardson then said he doesn’t want the receivers to be locked in on just one route during a particular play. He said he wants the receivers to read the defense and be able to have options beyond the route called.

“This isn't a knock on any offense out there, but sometimes you get locked in on, 'Hey you line up and run this route,' and that's the route,” he said. “Regardless of what the defense does, that's the route. And for us, I don't want to be locked in to a route. Let's give them some options. But in order to do that, you can't have 1,000 plays that they're thinking through. And that's the biggest thing we've probably done - we're going to give them some options on some routes, but we've go to bring the plays (down) some.

"What's our base, what's our core, so we can rep that a ton in practice so not only is the receiver comfortable in what he's doing, but the quarterback is also comfortable with him and where he's got to be."