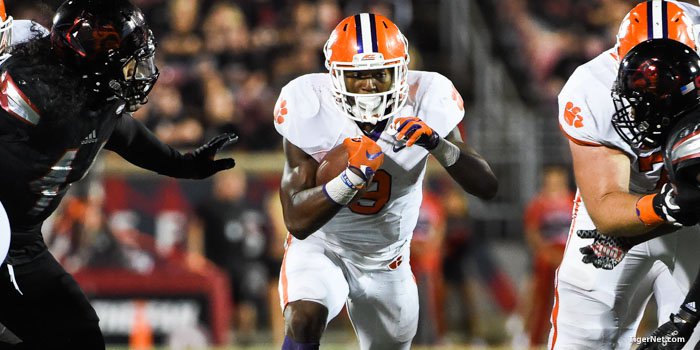 Wayne Gallman led the Tigers with 24 rushes for 139 yards.

Tony Elliott
Co-OC / Running Backs
View Full Profile told his offense that there would be adversity during Thursday’s game at Louisville and that the proof of what kind of program the Tigers have would be in how they handled that adversity.

“We had some adversity tonight. We had Joe Gore go out early, then Fruhmorgen comes in and he goes out, then Maverick Morris

Maverick Morris
RS So. Offensive Line
#69 6-4, 299
Broxton, GA
View Full Profile who's mostly at guard comes in at tackle. Joe came in and the doctors said he was fine. It was good to get him back,” Elliott said after the game.

The Tigers made enough plays to win, and Elliott said it shows the culture of the program.

"It's a testament to what Coach Swinney has done with this program. I have been around a long time and I was part of games where we didn't win those games in the fourth quarter,” Elliott said. “It goes back to the foundation of mental toughness. It goes back to understanding why we work in the summer, that's why we work everyday and finish every drill. It will come down to details and situations. Not every game you will win by a big margin and we understand that. The key is getting into the fourth quarter with a lead and we feel like we have the mental toughness to finish it off and win."

C.J. Davidson
RS Sr. Running Back
#21 5-10, 202
Clemson, SC
View Full Profile was the only other running back to get a carry, and Elliott said the coaches wanted to go with the hot hand in Gallman.

"It's like we talked about earlier in the week. If you got hot, we'd roll with you,” he said. “We had five guys and we wanted to give them all an opportunity but Wayne Gallman was running hard, he was finding it and was consistent and we didn't want to take it out of his hands. I think those guys on the sidelines recognized that. They were supporting him and pushing him."

Gallman ran with toughness and confidence, according to Elliott.

"That's something we've known about with Wayne from day one. I think it was more of a confidence issue last year,” he said. “He was a young guy out there just trying to figure it out. Now he knows what he is supposed to do. He understands the run schemes better. He knows what we're trying to get accomplished and you've seen a more physical mentality."

Watson carried the ball 12 times for 61 yards, something that Elliott said was by design.

"Absolutely. He's dangerous with the ball in his hands whether he's throwing it or running it,” he said. “They presented some opportunities for us to run him. That's something that we have been working on that we did not show in the first two games. We were able to get some mileage out of him. He's a warrior. I think everyone challenged us to run the ball.”

The conditioning of the team

"You know coach Batson and his group do an unbelievable job with our guys. If you just watch us the last two years in our bowl games, we've been well prepared and well conditioned. I think our guys practice fast. The defense has to go against us in practice. We don't keep them on the field long, but we're going fast. We get our work in. We practice fast so that we are the fresher team down the stretch."

The formation of the second touchdown

"That's a play coach Morris brought with him here. Jeff and I liked it so we kept it. We scored on the same play at N.C. State a couple of years ago. We knew on a short week it would be difficult to prepare for everything. We knew we would be in a situation where we'd need a little something. We had a certain portion of the field where we wanted to run it. The look was there and they just executed it well."