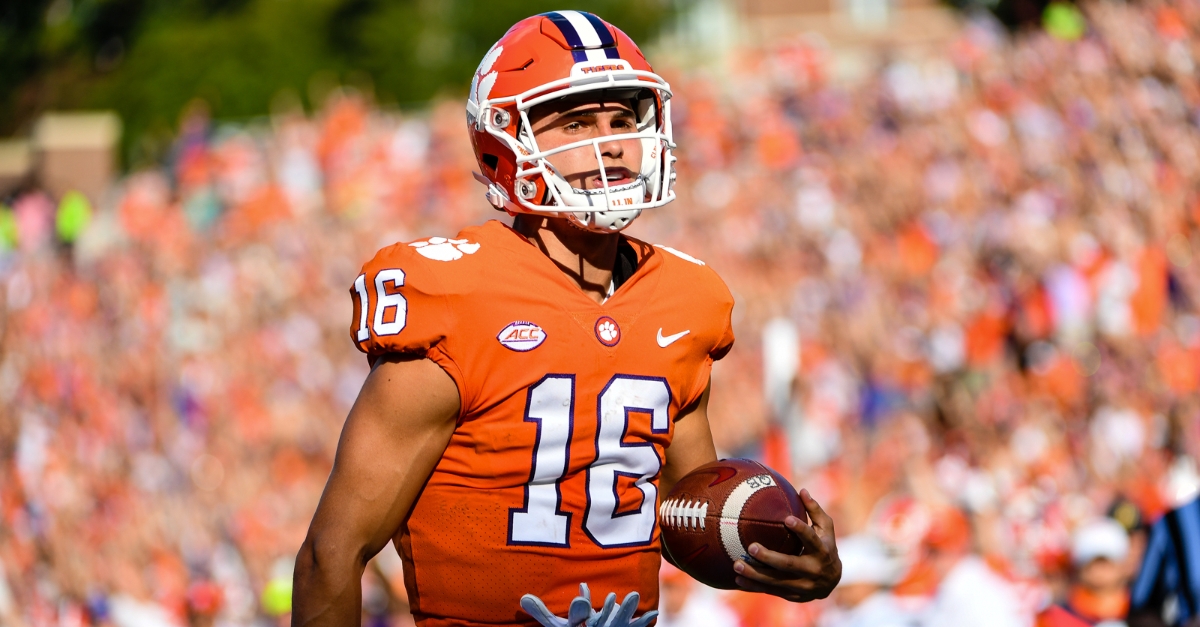 Taylor is electric when he gets the ball in his hands.

Tom Cruise may have to watch out, there’s a new Maverick in TigerTown.

Clemson true freshman quarterback and punt returner Will Taylor has garnered a new nickname around the Reeves Football Facility: "Maverick." In his first game action inside of Death Valley last weekend, Taylor made a big impact on special teams, including a 51-yard punt return down the visiting team sideline. The return was the Tigers' longest since 2019. Taylor also rushed the ball five times for 20 yards and had a touchdown run called back due to a penalty in the first quarter.

Clemson offensive coordinator Tony Elliott told the media on Monday that he is taking full credit for the fly new nickname and that Taylor reminds him of Cruise because of how the South Carolina native carries himself.

“I’m going to take credit for the nickname Maverick,” Elliott said. “I called him Maverick first, he reminds me of a young Tom Cruise from Top Gun (playing the character 'Maverick'). He’s got that feistiness to him, that edge to him. I think he likes it too.”

“He (Taylor) provides a spark around here. What I think he’s done too, has garnered the respect of everybody in that locker room. It’s obviously tough for him, he’s coming in as a baseball and football guy, so he came in with some challenges. But he came in here and right away showed the guys in the locker room that ‘Hey, I’m a football guy. I’ll do whatever it takes,’ and kind of dispelled all of that.”

Taylor had his first chance to speak with the media this week since joining the Clemson football team, and the question was finally answered on how he got the new nickname.

“When Coach Elliott told me he was going to call me Maverick, I was like, ‘Okay, I kind of like that,’ ” Taylor said. “It started a few weeks ago, and it’s been kind of catching on ever since. He never really told me why he was going to call me that. I don’t know, maybe me and Maverick have some of the same qualities together. Maverick seems like a very confident guy, I like that.”

Taylor was projected to be a first-round pick in the 2021 MLB Draft before telling teams that he was going to chase his dreams of playing college football and baseball at Clemson. The Dutch Fork High School product said it wasn’t an easy choice, but he’s happy with the outcome so far.

“It was a long process, the last six months my family and I have been discussing a lot,” Taylor said on his decision between the MLB and Clemson. “We weighed out both experiences and made a pros and cons list and that was a big thing we did. We decided to come to Clemson, and so far the experience has been awesome.”

“I’ve been here three months so far, and it’s really been a blast,” Taylor said of his Clemson experience. “From the academics, the athletics here at Clemson, and being able to play both sports here is going to be really special. So far, it’s been really awesome.”

Taylor has been a Swiss Army knife for head coach Dabo Swinney and the offensive coaches in his time at Clemson. While Taylor is listed as a quarterback on the roster right now, he also returns punts and the plan is to move him to wide receiver in a year or so. Taylor said he knows his role and is here to do whatever he has to do to help the team.

The comparisons have already begun comparing Taylor to another Clemson athlete who switched to wide receiver from quarterback, who is now making plays in the NFL, in Hunter Renfrow. The freshman knows that’s a big name to be compared to around these parts and hopes he can live up to those comparisons.

“I’ve gotten a lot of comparisons to him,” said Taylor. “I’ve gotten the chance to talk to him a few times, and that’s a big name to be compared to. He was a good person and a baller on the field, so in the end that’s kind of the goal.”

It is yet to be determined who will step up and be the Goose to Taylor’s Maverick, but Elliott may have to come up with that soon and let us know.

According to Tony Elliott, Will Taylor feels the need.