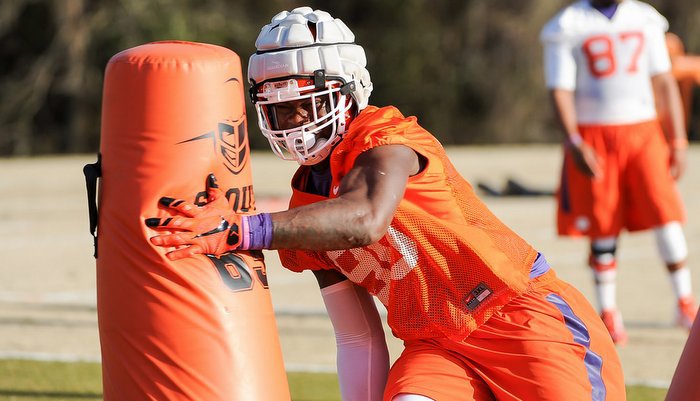 With the losses of first-round NFL Draft pick Vic Beasley

Tavaris Barnes
Defensive End (2010 - 2014)
#9 6-3, 275
Jacksonville, FL
View Full Profile , there were already plenty of questions about who would step in to take over the production vacated by three of Clemson’s 2014 defensive ends.

Ebenezer Ogundeko
RS So. Defensive End
#1 6-3, 250
Brooklyn, NY
View Full Profile was supposed to be part of the solution - competing for time with Kevin Dodd

Kevin Dodd
RS Jr. Defensive End
#98 6-5, 275
Taylors, SC
View Full Profile ; those plans came to screeching halt Tuesday morning when it was announced that the Brooklyn (NY) native has been dismissed from the team.

“Ebenezer Ogundeko has been dismissed from the Clemson football team for a violation of team rules and behavior detrimental to our football team,” said Swinney. “We wish him well.”

Shaq Lawson
So. Defensive End
#90 6-3, 269
Central, SC
View Full Profile . Trying to break into that rotation is like breaking into Fort Knox.

Despite Ogundeko not having a ton of experience, Ogundeko told TigerNet during spring practice he felt his time had finally come after spending two seasons behind more veteran players.

“I feel like now is my time, if I have a great year and continue to progress,” Ogundeko told TigerNet. “I just want to be a big leader on the defense because the coaches are looking for a leader. I just want to come out here and help my teammates. I want to get double-digit sacks, but my main goal is helping the team get to the National Championship. I could not really care less about the sacks and the numbers as long as we are winning.”

With Ogundeko’s dismissal, the questions about the depth along the defensive line, particularly at end, become even more magnified.

Junior Shaq Lawson and Dodd will go into fall camp and probably the season opener against Wofford as starters, but after that it’s anyone’s job to claim, and there are several defensive ends in line for playing time.

Four of the seven defensive ends on Clemson’s roster are either true or redshirt freshmen - Austin Bryant, LaSamuel Davis, Chris Register and and Richard Yeargin.

That’s a lot of youth on the edge for a Clemson team that hopes to compete for a conference title this season, and an injury to either Lawson or Dodd could be the difference between a win and a loss somewhere down the road.

The young players will have to step up – and quickly – while learning under the bright sun of the two home games to open the season. Then it’s learning on the job under the bright lights of Papa John’s Stadium on a Thursday night in Louisville.