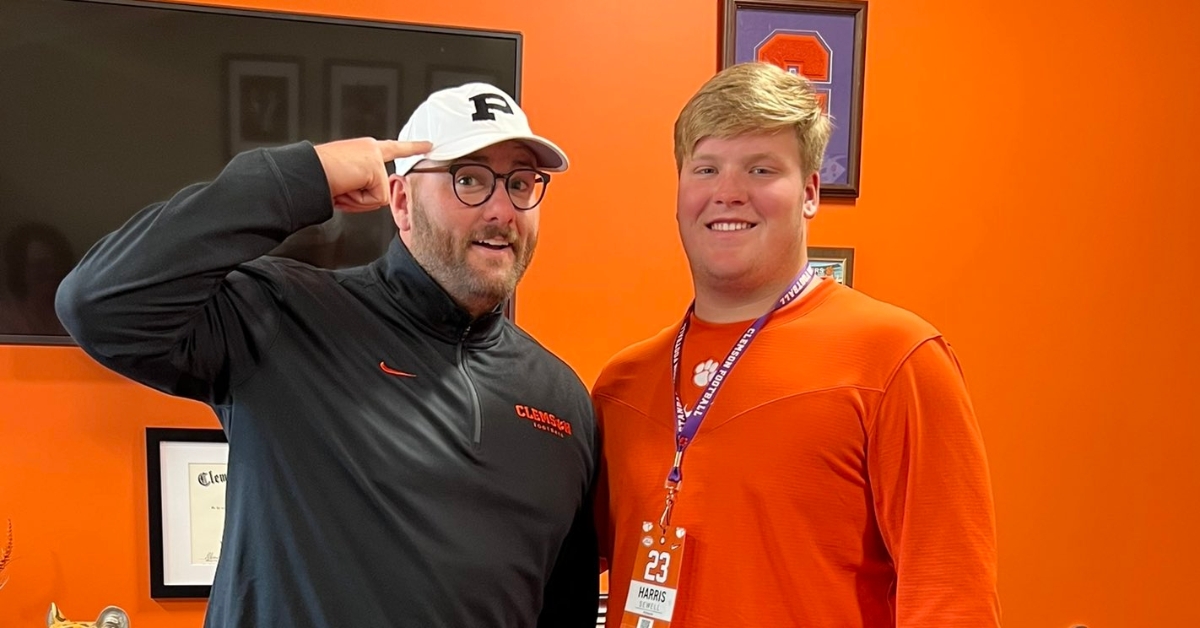 Dabo Swinney has another Dandy Dozen, and number 12 comes from the big state of Texas.

Swinney signed just 12 players in his first-ever recruiting class at Clemson, a class that he calls the Dandy Dozen. That was back in 2008, and while the 2023 class will have over 20 players, the Tigers received verbal commitments from an even dozen in the month of June. The 12th is 4-star OL Harris Sewell of Permian (TX), who gave his verbal during an announcement Wednesday afternoon.

Per the 247Sports composite rankings, Sewell is the No. 2 interior offensive lineman in the class of 2023 and the No. 14 overall recruit from the state of Texas.

TigerNet spoke Permian assistant coach Vance Washington about the commitment, Clemson’s success in Texas, and what Sewell brings to the table.

"He's just the humblest kid. Every place he's visited is just great,” Washington said. “There's never been a negative word about any place he's visited. The way he's approached this whole process, he's just so humble. You can't find a better kid. Not the football aspect of it, but just as a person, he's a great leader. He's not a real vocal guy. He doesn't talk a lot. He'll talk some, but it's always positive. He's got great parents. You can't say enough good things about him. We've had a lot of kids go through this process in the past. It takes a special kid to handle this, and he really has. He'll make everybody really happy because not only is he a great football player but he's a great kid and a great person. He's got great character.

“Meeting Coach Swinney, he wants quality people as well as good football players and Harris is that for sure. Harris told me last week where he is going, but he wanted to keep it lowkey and quiet and that's just him. He doesn't want a lot of hoopla and all of that. He just goes about his business.”

“This is my personal opinion, but meeting Coach Swinney and Thomas Austin and when you talk to Coach Swinney, it's like you've known him his entire life,” Washington said. “When they came in, it was really different. They were so down-home and for lack of a better word, family-type guys. They've stayed in touch with us. Coach Austin will text and see how things are going. They're just good guys. I think Coach Swinney, when he came in, he's just down-to-earth as good a guy as you'll ever meet. He's just different. When you're talking to him, you're talking to a real guy and not a salesman.”

Sewell may be a nice guy off the field, but when he steps between the lines it’s a different story.

Where will Sewell play at the next level?

“He's played all positions for us - guard, tackle and center. I think you keep him as a guard. I'm the defensive coordinator so I go against him all spring and during the year,” Washington said. “He can play whatever they want him to play. He's got great hips, great explosion, great feet. He played basketball and baseball when he was younger. He's an all-around athlete. He's 300-pounds now so that doesn't translate well to basketball or baseball. When I first noticed how talented he was and what a great athlete he is was when he was playing basketball in middle school. He played linebacker as an eighth grader in middle school. This kid is a good athlete and he's just gotten big.

Washington closed by saying no one works harder at their craft than Sewell.

“He's really worked hard in the weight room. It's scary to think that's he's just a 17 year old kid right now and how strong he's gotten,” he said. “What next year will hold, who knows? As much as he jumped this season during the offseason in weight room was just unbelievable. We're limited with how much we can do but when we gets in a college weight program and that time, who knows what he'll what he'll do. It will be really neat to see. He works his tail off. A lot of those big guys out there running and doing all of the agility stuff we put them through, that ain't fun. For a big ol' guy, that's just not something that's fun. He just really works at it. He's really coachable. That's what's neat. He's so coachable and everything. I know I gush about him, but I think he's pretty special.”