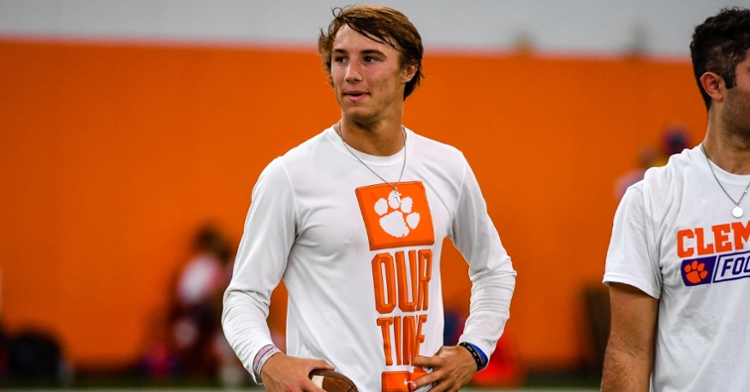 Klubnik is in Clemson and ready to get to work.

Cade Klubnik has arrived in Clemson and he’s ready to get to work.

Klubnik turned heads and opened eyes when he led his Austin (TX) Westlake team to a state championship in 2020, earning offers from around the country. Klubnik was then named the Elite 11 Finals MVP over the summer, impressed at different camps, and led his high school to yet another state title.

On Saturday, Klubnik was named the All-American Bowl Player of the Year after he led his West squad to a 34-14 victory. In all, Klubnik completed 12 of his 18 passing attempts for 205 yards and three touchdowns.

“The game was so much fun. The competition was incredible, but just getting to build those new relationships with guys and play at that speed of the game was amazing,” Klubnik told TigerNet. “I loved it.”

Klubnik and his parents made the short drive from San Antonio to Austin Saturday evening, he finished packing, and was on a plane early Sunday, headed for the next step in his journey. While most of his high school teammates will be in a class back in Austin on Wednesday, Klubnik will start classes at Clemson. He will miss everyone back in Texas but is excited about getting started for the Tigers.

“It's crazy! Definitely bittersweet having to say goodbye to my lifelong buddies yesterday. But ready for new phase of life,” Klubnik said. “It’s just such a blessing. The amount of relationships that I have built with my coaches and teammates is so important to me. They have had such an impact on me. When it comes to football, those relationships just made every achievement our team had so much more fun.”

Klubnik is ranked as the top quarterback in the nation by Sports Illustrated, PrepStar, and Rivals.com and as the second-best quarterback by 247Sports and third by ESPN.com. He is the Gatorade Player of the Year in Texas and was named as one of three finalists for National Gatorade Player of the Year for 2021. He amassed a 27-0 record as a starter.

As a senior in 2021, despite missing three games with an injury, Klubnik completed 71.3 percent of his passes for 3,251 yards and 43 touchdowns against just three interceptions as Westlake finished the year 16-0. He also rushed 70 times for 465 yards and 12 scores.

He had one final message for everyone at Clemson before his plane landed.