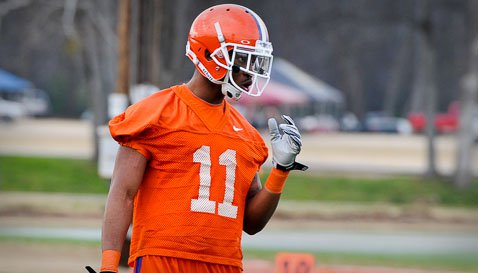 ATLANTA – The future at free safety for the Clemson program might begin Monday night in the Georgia Dome when Clemson takes on LSU in the Chick-fil-A Bowl.

Blanks registered 51 tackles, two tackles for loss and led the team with six passes broken up on the season. However, the 6-1, 190-pounder out of Tallahassee, FL, moved to free safety when bowl workouts began, and that is the position he is expected to man next season for the Tigers.

He will also play there in the bowl game.

“I have been primarily at safety,” Blanks said after Thursday morning’s bowl practice in the Georgia Dome. “I have been getting tons of reps, and I have the game plan down. I have also been rotating in at the nickel spot all week.”

Rashard Hall
Gr. Safety
#31 6-2, 210
St. Augustine, FL
View Full Profile to start the game, but he is preparing as if he will get the start.

“Right now, he is first team,” Blanks said of Hall. “He has had a very consistent season. But I am definitely preparing like I am the starter. I am not sure [how much he will play] but I am preparing as if I am starting. I am looking at this as an opportunity. No matter how many reps I get in the game, the work I’ve put in won’t be in vain because it will help me going into the offseason.”

Blanks said his preparation is just as much mental as it physical.

“I am just preparing my mind,” he said. “I am going into it thinking it is just another game. LSU is a good team, but so are we. I have been watching film and getting the game plan down, and just preparing the best way I can.”

Venables has been working with the secondary during bowl prep, and Blanks said Venables’ message to the team has been simple.

“One man doesn't stop the program,” he said. “We all love Coach Cheese, but the ball has to keep rolling. Wesley [Goodwin] and [Brian] Mance have come in and done a great job. They are great guys and we haven’t lost a step.”