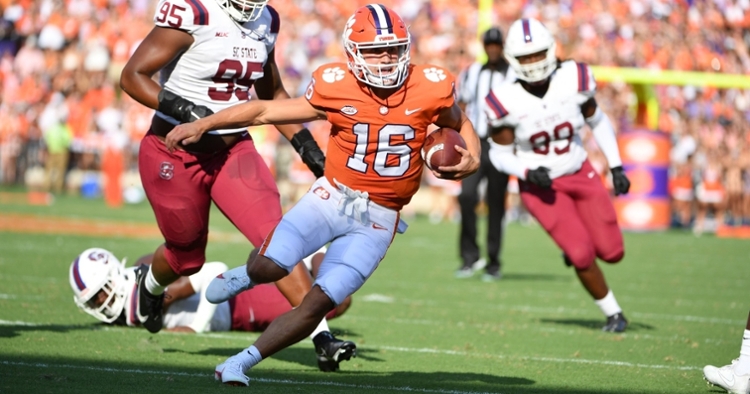 Will Taylor was impressive during his time on the field.

CLEMSON – A note, a quote, and a stat from Clemson’s 49-3 victory over South Carolina State.

True freshman backup quarterback/wide receiver/punt returner Will Taylor was impressive during his home debut. He had a 19-yard touchdown called back because of an illegal block in the back, had a 51-yard punt return, rushed five times for 23 yards, and showed flashes of brilliance. In honor of his Death Valley debut, we bring you two quotes.

"Man Willy-T, he's an amazing person and soul. He brings life to the team every day in practice,” starting quarterback DJ Uiagalelei said. “I love that man, Willy- T. He can do it all. The sky is the limit. He can do it all, quarterback run, different designs. I feel like we got to get him more involved in the offense. I know today I was watching like, 'Dang I like watching Will Taylor run the ball.' It's great to see a guy like him, the type of person he is, to see the fruits of his labor. I feel like he will get a lot more love in the offense."

Swinney smiled when asked about Taylor.

"Y'all see why I put Will Taylor back there? He just has a different level of maturity to him than your typical 18-year old,” Swinney said. “I'm kind of questioning it myself, 'I'm really going to put this guy back there in the Georgia game?' But he's unique."

It was good to see backup quarterback Taisun Phommachanh get out on the field and throw a touchdown just five months after tearing his Achilles. I asked him earlier this week – given the unusually short turnaround – if it was a complete tear and he said it was. Many didn’t know if he would play at all this season (including me) and if he did, the thought process was that it would be later. Instead, he wore a brace early in August camp then shed the brace and participated fully in practice the last week.

With 3:52 left in the third quarter, Phommachanh threw a 14-yard touchdown pass to Lyn-J Dixon. The passing touchdown was Phommachanh’s first of his career, and it came in the same end zone he was driving toward when he tore his Achilles 161 days earlier during Clemson’s spring game on April 3, 2021.

One hundred and sixty-one days – from tear to touchdown. Amazing.

The Tigers are continuing to win at home. Clemson improved its national-best record at home in the College Football Playoff era (since 2014) to 48-1. Clemson also won its 29th consecutive home game to extend its school record for both the longest home winning streak and longest home unbeaten streak in school history (as well as extend the nation’s longest active home winning streak). Of the 135 players on Clemson’s 2021 roster, 130 have never experienced a home loss in their Clemson careers.