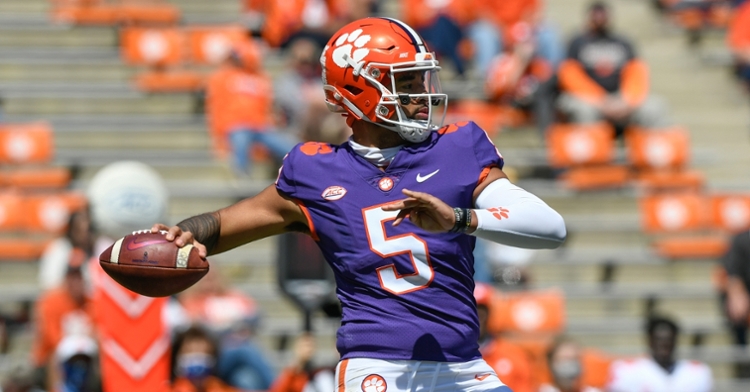 DJ Uiagalelei gets a crack at the Georgia defense in Charlotte.

One of the most intriguing matchups of the 2021 college football season just so happens to take place in the first weekend of the season as well, when defending ACC Champion Clemson travels to Charlotte, North Carolina to face off against a familiar powerhouse Georgia. The two teams have not met since 2014, when the Bulldogs handed Dabo Swinney and his team a 45-21 loss to open the season in Athens. Georgia leads the all-time series 42-18-4 over the Tigers.

Both teams opens the season at Bank of America Stadium with new faces on both sides of the ball as well as familiar one in the back-seven of the bulldogs’ secondary when it comes to former Clemson five-star recruit and All-American Derion Kendrick, who announced his transfer to Kirby Smart and Georgia earlier this month. Kendrick started seven games for Clemson last season, but he could not stay out of Swinney's “Love Shack” and the two parted ways prior to spring practice.

So what does Clemson have to do to walk out of BOA Stadium victorious on September 4th? Well, this game comes down to the battle in the trenches as well as the Tigers' ability to shore up secondary, a weak point in the Sugar Bowl loss to Ohio State last season.

The Bulldogs have always been a run-first type of team, and much can be credited to the running backs they have put in the NFL over the course of the last decade. With talents such as Todd Gurley, Sony Michel, Nick Chubb and D’Andre Swift all spending time in the Bulldogs backfield, that's no surprise.

But, with Smart and his staff feeling like they have found their guy in transfer quarterback J.T. Daniels, Smart wants his offense to be more dynamic in the passing game.

“We want to be explosive, we want to be a vertical passing team. We’ve got really good receivers in and I think they compete well. That will be the expectation every day we go on that field is to attack people vertically and throw the ball and catch the ball," Smart said, Connor Riley of DawgNation reported during spring practice.

Daniels started the final four games of the season for Georgia last year after rehabbing an injury. The USC transfer led the Dawgs to a Peach Bowl victory over the Cincinnati Bearcats and threw for 1200 yards and 10 touchdowns while also being picked off twice last season. Daniels will be without probably his biggest playmaker on the outside, as George Pickens tore his ACL during spring ball and will miss most of the season with the injury.

Smart and staff did pick up another big-time target transfer on the offensive side of the ball, adding another former 5-star tight end Arik Gilbert who transferred from LSU after being named an All-SEC Freshman and catching two touchdowns for the Tigers in 2020. Gilbert is paired up alongside Darnell Washington, another big 6-7 265-pound tight end. Look for Georgia to really rely on the tight end position, especially try to pick on James Skalski with a mismatch on the tall and heavy tight ends.

The Bulldogs still have threats on the outside in Kearis Jackson, who led the team in receiving yards last season as well as speedster Arian Smith, who Brent Venables will likely have to keep an eye out for.

Clemson, who returns all but one starter on defense, has their hands full with the new-look Bulldog offense, but giving Venables eight months to sit in his mad scientist lab and create schemes and coverages to confuse Daniels in the pocket is what the 10th-year Tigers coordinator lives for.

On the defensive side of the ball, Georgia has to replace its top four cornerbacks from last season as well as two of their best defenders up front. The addition of Kendrick helps bring some leadership and experience to the Bulldogs secondary but will it be enough to stop the talented Clemson offense? Even after the departures of No. 1 overall draft pick Trevor Lawrence, as well as fellow first-round pick Travis Etienne, Clemson fans are hopeful that this year's offense could be more explosive.

The Tigers are led under center by No. 2 overall 2020 quarterback prospect D.J Uiagalelei and the expected return of Justyn Ross on the outside, Georgia fans could be watching the duo have a coming out party in the opener. The Clemson running game may be a little shaky out the gates, as Lyn-J Dixon has his sights set on the RB1 position but don’t forget about the freshman Kobe Pryor and Will Shipley, who looked impressive during spring camp.

It's going to be a hard-fought battle. For the critics that year after year say “Clemson doesn’t play anyone," we raise you a top-5 matchup between SEC and ACC to kick off the season. While the winner of the game most likely has a greater chance to make the College Football Playoff, an early loss will not put the nail in the coffin for a Playoff run. Clemson could very easily run the table in the ACC and Georgia fans are buzzing that this is their best shot at winning a National Championship since 1980.

Clemson and Dabo Swinney walk out with the win, however, due in large part to the experience Clemson has compared to the relatively young Bulldog team. Daniels has yet to play in a big game -- sure the Peach Bowl was a nice win for them, but in front of your home crowd, it's easy. Throw 75,000 fans in BOA and let's see how the junior quarterback can compete. Uiagalelei was thrown in the fire last season when Lawrence came down with COVID, so the sophomore from California already has some big game moments under his belt.