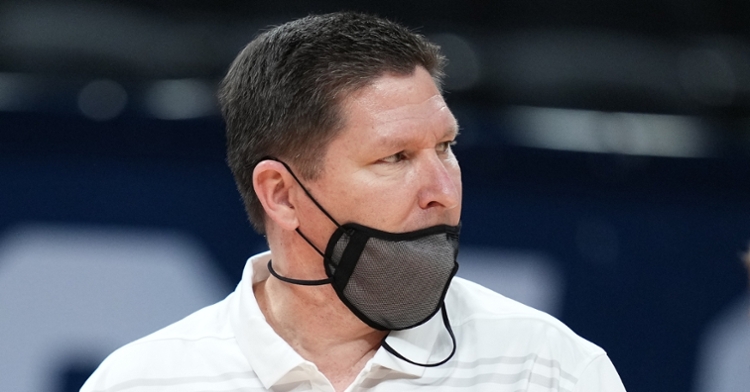 Senior Clyde Trapp sat down for his postgame interview with the media late Friday and barely listened to the first question. Once that question was over, Trapp apologized and then took a few minutes to defend his coach and the Clemson program with a heartfelt message.

Rutgers defeated Clemson 60-56 Friday night in Indianapolis in the first round of the Midwest Region of the NCAA Tournament. Clemson reached the round of 16 in its last tournament appearance in 2018, but the Tigers have lost in the first round in four of their last six NCAA trips.

“Before I answer any questions, I want to express how proud I am of this team. We had a lot of adversity this year, with everybody against us you would kind of say,” Trapp started out saying. “And I want to say I am really proud of this team, this coaching staff. I am thankful for Coach Brownell and this opportunity. It's been a great four years. I am so proud of this team.”

Trapp posted 14 points, going 5-for-6 from the field in his final game in a Clemson uniform, but used the first part of his postgame interview session to fire back at those who doubt the Tiger program and head coach Brad Brownell.

“That is basketball. That is the profession. I wish the people that say these crazy things about our program, I wish they would really sit in the office and talk to Coach Brownell,” Trapp said. “They see these wins and losses and the ups and downs of a season and they throw all of their emotions into that. But to get to know Coach Brownell, you would love him as a person and you would love him as a man. Me and Aamir (Simms) especially, since we've been here the longest, we've felt for him.

“We actually have had conversations with each other about how Coach Brownell gets all of this backlash and he still every day comes in and he is ready to work. That is what a man does. We are grateful for him. Not only has he taught us things, but we have learned from him just being who he is. Like I said, it's crazy that people would say that but that is the profession and Coach Brownell knows that. And he knows that his team is behind him just as much as he is behind us.”

Trapp said that he knows Brownell sees the backlash that comes from a fan base wanting more out of the program.

“Coaches are human, too. Just like we read things on Twitter, Coach Brownell can read things on Twitter. I know he has seen it and he knows that we know that he sees it,” Trapp said. “The best thing for us to do is to just be there and let him know that we support him just as much as he supports us. If people would talk to Coach Brownell, they would understand that he is human and they would understand that he is a great man. He wants the best for every single player on the team, from the star player to the walk-ons on the team. He holds everybody to the same standard and doesn't expect anything under that standard. I think that is the quality in a person that everybody should strive to have.”

Trapp then said he wants the fans to understand that Brownell’s program is about more than wins and losses.

“I think a lot of the programs around the country focus mainly on basketball. Throughout my recruitment I knew I wanted to go to a school that would develop me as a basketball player but also a man,” he said. “I think Coach Brownell and his approach to everyday life has helped all of the other seniors - me and Aamir (Simms) and JB (Jonathan Baehre), we are not only leaving as better basketball players, but we are leaving as better men. And I think that is what Clemson basketball is - we have great players but we are also developing men, too. That is really the biggest thing I am going to take away from Clemson.

“This loss right here, don't take this the wrong way, but this loss takes nothing away from our season. We have had so much adversity. We had a COVID pause there where we kind of lost our way, and I think the guys and Coach Brownell and the coaching staff did a good job of fighting back and finishing strong in the league. I don't think people understand how hard it is to win these games. My four years here has prepared me for how to win these games and also taught me how to lose these games. I want the people to know that we are on the up and up. It's proven. We have won these tough games. We've beaten the top of the top, the four seeds or three seeds or whatever. Clemson isn't at the bottom of the ACC and we have been fighting for that respect all four years that I've been here.”