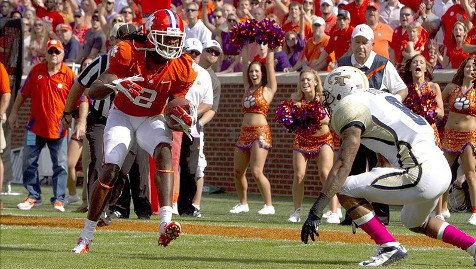 In Clemson's game notes there is a typo that says “Memorial Stadium, Frank Howard Field (61,500).”  That's 61,500 instead of 81,500.  Unfortunately, I think we will see much closer to the typo number than the capacity number.

Clemson fans love making a day or even a weekend out of a home game.  It is a tailgating experience and something we value because we only get seven each year.  So this Thursday night stuff will seem like it robs many fans of one of those valued experiences.

If there is one good thing about today's game, it’s the idea that I think this helps the ticket sales for next week's game against the Citadel, which is now a sellout.  For many fans that can't be here tonight, next week will be the only time they have had a chance to see the Tigers at home since October 19.  Also, this appears to be a special senior day where fans send out an incredible group of Tigers.

I have been sent the following release and been asked to remind fans once again about the parking for today:

For the first time in over a decade, the Clemson campus hosts an ESPN Thursday night football game. To prepare for the unusual circumstances of hosting such a large event on a class day, the athletic department has worked in conjunction with the university to put together a plan to minimize the challenges faced by academic and university operations.

University offices close at noon Thursday, and classes after 12:15 pm will be rescheduled or deferred. Game day parking lots open at 2 p.m., and fans are encouraged not to enter campus until parking is available.

When I was a kid growing up and watching Clemson football games I never got the sense that Georgia Tech was a rival.  Heck, the Tigers and Yellow Jackets didn't even pay each other from 1978 to 1982.

However, Tech has had Clemson's number since they joined the league in 1983.  The Jackets are 16-15 against the Tigers since 1983.  Clemson has won just three of the last 10 games against Tech.

In fact, Tech has beaten Clemson 50 times, which is more than any other school.

This week marked the opening of the fall signing period.  The Clemson basketball staff and baseball staff are extremely excited about their new signees.

Men's basketball signed two players, including Donte Grantham, who is the highest rated prospect to ink with the Tigers under Brad Brownell

I got a look at the Clemson basketball team for the first time last night.  Due to high school football I missed Friday night's opener, so I was anxious to get a peek at the Tigers.

I believe this team will have some issues, like inexperience in the post and scoring against zone defenses, but there are some positive signs.

Player development is what this staff is known for and it was pretty obvious to me several players had improved from a season ago.  Landry Nnoko had added size and strength, which gives him a chance to be a big contributor.

Damarcus Harrison has improved on both ends of the floor.  His shot looks much better.

I was impressed with Jaron Blossomgame's athletic ability and quick leaping ability.  He did not look lost on either end of the floor.

K.J. McDaniels has improved in a lot of areas and is now the primary scoring threat.

Ibrahim Djambo is an intriguing athlete.  He is a highly skilled player with a good looking shot.  I also liked his quickness for his height.

Austin Ajukwa and Devin Coleman did not play enough minutes to get a good read.

Josh Smith is still very limited, but he has improved and looks to be in better shape.