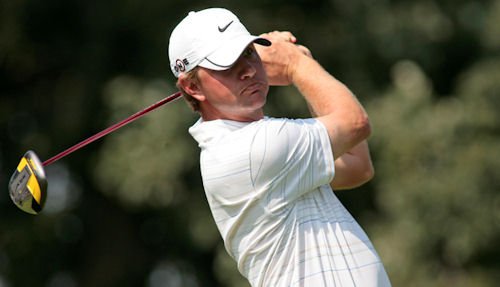 One of my favorite things to do this time of year is follow all of the former Clemson golfers on their respective tours. Each week it seems Larry Penley's pupils are making a run at a title on one tour or another. But it has not been a great start for the former Clemson golfers on the PGA Tour early in the season. Three Tigers are trying to rebound from disappointments in 2012 and one is recovering from an injury.

Lucas Glover injured his knee early in 20112 and had a hard time regaining his game for much of the year but he has shown solid form in the first few events this season. This year Glover is 74th on the money list with $303,182. He has played in six events and made the cut in five. His best finish has been a tie for fourth at the Honda Classic two weeks ago. Glover finished 47th in Palm Springs, 39th at Torrey Pines, 54th in Phoenix and 38th last week in Tampa.

Kyle Stanley had a rough finish to the season last year and was also looking to regain his confidence entering 2013. Stanley is 115th on the money list with $163,456. In six events he has made four cuts. Stanley finished 30th at the Tournament of Champions, 67th in the Sony, 74th in Phoenix and 18th at the Honda. His missed cuts came in Palm Springs and Torrey Pines.

D.J. Trahan is 135th on the money list with $113,932. In his four events, Trahan finished 56th in Palm Springs and eighth in Puerto Rico. He missed the cut in Pebble Beach and last week in Tampa.

Jonathan Byrd has not played in an event this year. He has a wrist injury and has decided to not return until it is fully healed. The last time I checked Byrd was hoping to make his season debut fairly soon.

This week Glover and Stanley are in the field at Bay Hill.

So far Glover is the only Tiger who has qualified for April's Masters Tournament at Augusta National.

Every Thursday I have Clemson baseball coach Bradley LeCroy on my radio show and each week this year we have asked him about the progress of projected starting pitcher Kevin Pohle. LeCroy said this morning that Pohle still has not progressed to the point where he feels close to 100% and the staff would not put him in a position to hurt himself further. He said that as the season gets deeper into the schedule the possibility of red-shirting Pohle increases.

I continue to be encouraged for the baseball program but I would like to see improvement from Steve Wilkerson on defense. Yesterday the second baseman made his eighth error in 20 games. Several of Wilkerson's errors this season have come on routine plays. The defense has been good for most of the season around the diamond but Wilkerson would like to keep that number down compared to the way he has started in the first third of the season. He is a spark on offense but needs to pick it up in the field.

The Tigers host Duke this weekend and the Blue Devils took two out of three at Miami earlier this season. However, this is a big chance for a sweep from the Tigers. Clemson's first two ACC series came against two top 12 teams in NC State and Virginia and the Tigers travel to number-one North Carolina next week. Therefore, the Tigers need to have a good series this weekend to put a few wins in the bank.

Congrats to two former Tigers who have secured their first college coaching positions. Former Clemson All-American linebacker Levon Kirkland is the new linebacker coach at Florida A&M. Kirkland has coached at a couple of high schools in the upstate of South Carolina in recent years but he wanted to get into the college coaching field and has taken that first step.