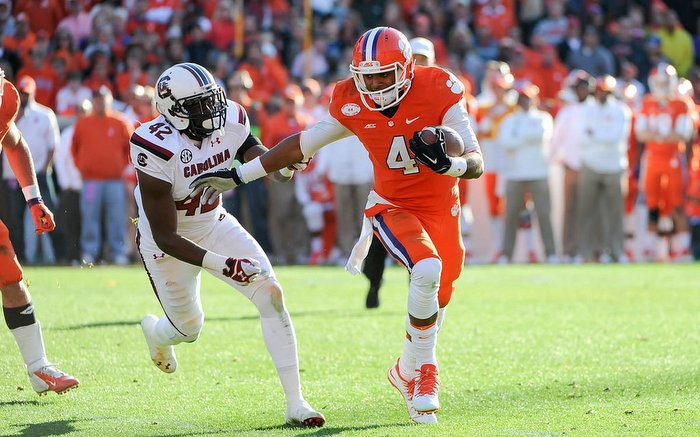 My first Clemson-Carolina was 1974, and, needless to say, I have just about seen it all when it comes to this rivalry. This edition brings a completely different feel than it did just two short years ago.

You never know how long teams will be up or how long they will be down. I was in the stands of the 2011 Orange Bowl when West Virginia was up 70-33 in the fourth quarter. You would have thought I was crazy if I would have told you Clemson would be 43-7 and West Virginia would be 24-24 since then.

The same can be said for this week's opponent. Two years ago South Carolina was coming off of three consecutive 11-2 seasons and was ranked fourth in the country. When you walked out of Williams-Brice two years ago after the 31-17 loss, what if I would have told you over the next two seasons the Gamecocks would be 10-14 and Clemson would be 21-3 and ranked number one in the country?

Many of us saw this coming on both sides. I did not envision Clemson being the nation's top-ranked team, but I knew the Tigers have been stockpiling a ton of four- and five-star prospects. I was one year too soon on South Carolina's demise. I thought 2013 would have been their slide year, but Connor Shaw had an unbelievable season, and Jadeveon Clowney was a factor as that duo bailed out South Carolina in close wins against Central Florida, Kentucky, Missouri, and Florida.

In the meantime, Clemson had recruited as well as anyone and was busy working its tails off on the recruiting trail. The Tigers signed five-star talent like Deshaun Watson, Deon Cain, Ray Ray McCloud, Mitch Hyatt and Christian Wilkins.

If Clemson wins this game Saturday, it will be because they beat South Carolina the last few Februarys. It is pretty clear that the Clemson staff outworked the Gamecock staff on the recruiting trail over the last few seasons.

This rivalry is always fun and usually involves a little trash talk, but it seems like a long time ago since this past July when former South Carolina head coach Steve Spurrier said, "Don't listen to our enemies. We haven't lost it. And we've got a dang good team coming, and we're fired up, and we're going to be fired up when that team from Clemson comes in, last game of the season. Their quarterback's already challenged our guys, he says we can't beat them ever. So we're looking forward to that challenge also."

My, how things have changed in the last 24 months.