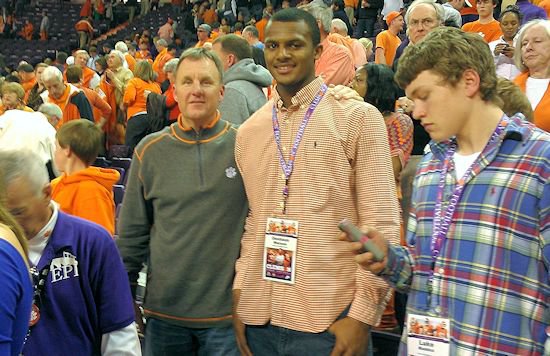 Yesterday was another step in the building of Clemson's football program towards a consistent national power. It was the fourth straight top 15 class signed by Dabo Swinney

Several things I wanted to touch on today. First is the amount of time, effort and energy spent on recruiting. Swinney said last night that recruiting never stops. The staff has a plan when it comes to every player in the next few classes. They plan everything. They even plan to plan.

Jeff Scott
Asst. Coach (WR) / Recruiting Coord.
View Full Profile is the recruiting coordinator and deserves a lot of credit. So does Thad Turnipseed who has brought energy and focus to the recruiting efforts.

Also deserving credit is the entire Clemson football family. The assistant coaches watch hours of film and spent many days on the road. The secretaries work endless hours. The graduate assistants are a big part of the process. The student assistants play a role. Support staff, academic support, the medical staff, etc. all deserve credit. In fact, Jeff Scott tweeted that over 200 people have a direct effect on Clemson's recruiting efforts.

I also wanted to mention the time that goes into this process. Coach Swinney mentioned last night that this was the culmination of two or three years of hard work. Many fans remember Deshaun Watson

View Full Profile committed to Clemson on signing day two years from yesterday. Many might not know that the staff worked two to three years on almost every prospect signed yesterday.

The staff goes through an exhaustive evaluation process with every prospect. They investigate every aspect imaginable. They watch as much film as they can get their hands on on each prospect. They study academic transcripts. They talk to teachers and guidance counselors. They have constant communication with the players' high school coaches. They build relationships with the parents, grandparents, aunts, uncles and guardians.

The point is that some of us sometimes question the recruiting efforts but none of us have the information the staff collects. They are ones that will be ultimately responsible. The staff will be held accountable both on and off of the field.

I also wanted to touch on today was the state of the program coming off of a terrific recruiting effort. Clemson football is on very solid ground right now. Swinney has mentioned many times that consistency is what he most desires with his program. He wants this program to compete at a high level on a consistent basis. The best way to do this is to recruit on a consistent level. The best way to do that is to work at recruiting every single day.

Swinney runs his program like a successful business. There is a plan for everything and the entire organization is aware of the plan. Everyone works by rowing in the same direction. That direction begins with the head coach. Swinney sets the tone everyday.

One thing you have probably heard from Swinney or Jeff Scott in recent days is the phrase, "The best is yet to come." Despite winning 32 games the last three years, despite beating LSU, Georgia and Ohio State, despite being ranked in the top ten in the country, Swinney says it can get better. He says it WILL get better.

This year's class will be remembered for a five-star quarterback, four talented wide receivers, a top notch tight end and a talented group of linebackers. It continues the streak of top 15 finishes. Only seven other schools have finished in the top 15 in recruiting the last four years.

Finally, I wanted to touch on the Class of 2015. Clemson already has six commitments for the class including the nation's number one offensive lineman Mitch Hyatt

View Full Profile . The staff has positioned itself to sign a top ten class next year. I would not be shocked if the Class of 2015 goes down as one of the best classes in recent history.

Maybe the best IS yet to come.