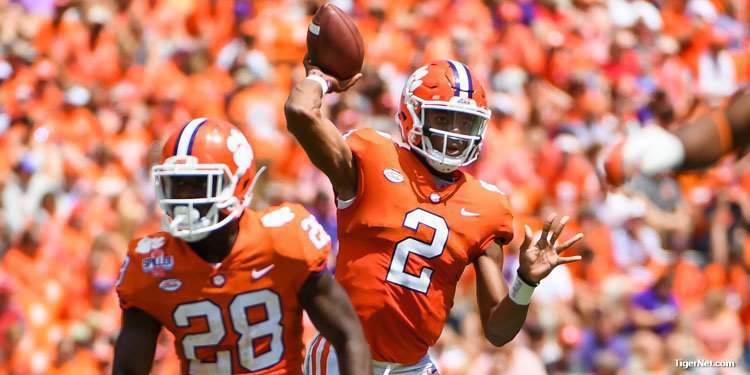 If you could have scripted the season opener on Saturday, I am not sure you could have written a better story. Almost everything went about as good as can be expected. The only disappointment was just how bad Kent State was and how little resistance they put up.

Offensively the Tigers scored early and often, but perhaps the best news was the effectiveness of Kelly Bryant. We knew Bryant could run and were not surprised by his seven carries for 77 yards and a touchdown, but his passing was on point going 16 of 22 for 236 yards including a 61-yard bomb to Deon Cain. In fact, all three quarterbacks played well going 25 and 35 for 312 yards and two touchdowns.

I was hoping to see the offense play a bunch of players and get everyone touches and that is exactly what happened. Fifteen different receivers caught passes. Nine different players carried the ball. And all three quarterbacks got significant action. The offensive line played well and that most importantly played a lot of reserves.

Everything was pretty efficient in term of the special teams play. Clemson only punted twice but averaged 49 yards. The kick teams and covers teams played well.

Defensively, Brent Venables was able to shut down Kent State holding them to five first downs. Kent State averaged only 2.7 yards per carry but was very predictable and only attempted five passes.

The best news for the defense was 33 players played. It was good to see players get significant snaps. Here is the official snap total:

Going into the game, the two biggest keys were getting their feet wet and staying injury free. Van Smith tweaked his knee and is questionable for the Auburn game, but this was the only new injury from Saturday. The other major goal was to look sharp and efficient. Clemson accomplished that and more

Yes, the opponent was inferior and put up a disappointing fight, but everything else was almost perfect. It was great to see the new signage in the stadium, the band's halftime tribute, and I was delighted to see Deshaun Watson make a return visit to the Valley.

This week is a whole new ballgame. Auburn is coming to town on Saturday night, and the real start of the 2017 campaign is upon us.