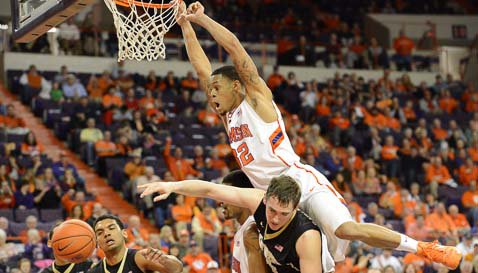 A few days ago I mentioned the difficulty of being a Clemson basketball fan for the past forty years. Last night was one of those special moments and performances that makes it well worth our while.

What we witnessed last night was one of the finest post-season performances from a Clemson player when K.J. McDaniels

K.J. McDaniels
Jr. Forward
#32 6-6, 200
Birmingham, AL
View Full Profile scored 30 points, grabbed 14 rebounds, had five blocked shots and two steals without a turnover. The junior went 9-11 from the field, 2-3 from behind the three point line and 10-12 from the free throw line. In fact, one could argue that McDaniels' effort was one of the best in any game played by a Tiger.

McDaniels' game would have been even more special if it were not for the terrific games the Tigers got from his supporting cast. Demarcus Harrison had a wonderful night with 17 points. Jordan Roper

Harrison reached double figures for the seventh time in the last nine games. His 17 points were the second-highest total this season trailing only the 20 he posted against Davidson in November.

Roper scored double figures for the 11th time this season and third time over Clemson’s last four games. He added four assists, his high since the Dec. 3 game against SC State.

The Tigers improved to 21-12, its largest win total since the 2010-11 team also won 21 games and this effort was considering Landry Nnoko

This was also an impressive performance against Georgia State's zone defense. Clemson shot 51% from the field, putting to bed the idea that zone defenses hurt the Tigers' offense. It was just the fourth time this season the Tigers shot over 50 percent from the field. The 78 points were the most in a Clemson win since its last game against a non-ACC opponent. The Tigers scored 80 in a win over VMI on Dec. 30.

Clemson has increased its win total by eight this season, the school’s largest jump in one season since 1938 when the Tigers went from six to 16.

Clemson will host the second round of the NIT against the winner of tonight's game between Illinois and Boston University. If the Tigers win they will host the quarterfinal matchup as well. If the Tigers play as well as they did last night, Clemson would have to be a favorite to advance to Madison Square Garden.

Finally, I wanted to leave you with this. How good was McDaniels' effort last night? Here is what the sports information office sent out in the post game notes:

K.J. McDaniels tied career highs with 30 points and 14 rebounds Tuesday. The junior from Birmingham, Ala., posted his 13th game with at least 20 points this season.

McDaniels’ 30 points were the third-most in a postseason game by a Tiger, trailing only the 34 by Larry Nance against Temple in the 1981 NIT and Horace Grant’s 33 against Middle Tennessee in the 1986 NIT.

McDaniels recorded his ACC-leading sixth “20 & 10” game of the season Tuesday. His total is the highest for a Clemson player since Sharone Wright

McDaniels scored double figures for the 30th time this season. He now has 575 points on the season, moving him into a tie for the seventh-best single season total in school history with Elden Campbell from 1989-90.

Prior to McDaniels, Clemson’s most recent player to post at least 30-10-5 in the same game was Dale Davis in 1991. McDaniels has done it twice this season (at Notre Dame).

McDaniels’ double-double was his team-leading eighth of the season.

McDaniels also posted five blocks, his high since tallying six in a win over Maryland in Littlejohn Coliseum on March 2.

McDaniels now has 91 blocks on the season, the most by a Tiger since Sharone Wright had 99 in 1993-94. It is the eighth-best single season total in Clemson history.

McDaniels and his teammates have made it a fun season and well worth watching. Like many of you, I am looking forward to seeing this team a couple of more times this season.