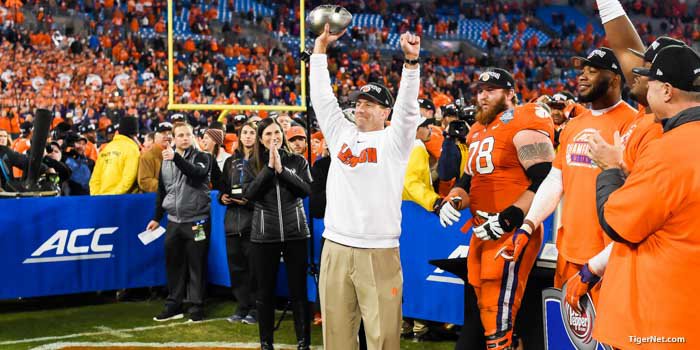 I have had a debate with friends in recent weeks about how this era of Clemson football compares to the 1980s. We have gone back and forth, and the only thing the '80s had over the current run is a national title. That could be topped Monday evening.

In my mind Clemson has made a jump to college football's elite status for only the second time in my lifetime.

Here is how I came to the conclusion that this season has catapulted Clemson to current elite status:

*The Tigers have won 56 games over the last five seasons. Only Alabama (61), Florida State (58) and Oregon (57) have won more games during this period. Ohio State is tied with Clemson at 56.

*Clemson has lost 11 games during that stretch. Only Alabama (7) and Florida State (10) have fewer losses than the Tigers. Ohio State and Oregon also have 11 losses the last five years.

*The Tigers have two division titles in the last five seasons. Of the 11 schools that have won 50 games, only Alabama (3), Florida State (3), Michigan State (3) and Stanford (3) have more conference division titles.

*Looking at the post-season, I combined the old BCS system and the new playoff system and considered the major bowl games to be the Rose, Sugar, Orange, Cotton, Fiesta and College Football Playoff games. Clemson has played in three Orange Bowls over the past five seasons. The only schools to play in more major bowls are Alabama (5) and Oregon (4).

*Clemson has won two major bowl games in the past five years. The only schools with more major bowl wins are Alabama (3) and Oregon (3).

One major difference between these programs is how they have fared against each other. Of the top 11 schools, Clemson is 7-4 with wins over LSU, Georgia, Ohio State and two over Oklahoma and Florida State. The Tigers have one loss to Georgia and three to Florida State.

Michigan State is also 7-4. They are 3-2 against Ohio State. They are 1-1 against Oregon. The Spartans have wins over Georgia, Stanford and Baylor and a loss to Alabama.

Alabama is 7-3 against the other ten programs. The Tide have gone 5-1 against LSU, 1-0 against Georgia and Michigan State, but have losses to Oklahoma and Ohio State.

Ohio State is 4-4 with a 2-3 record against Michigan State, 1-0 against Alabama and Oregon and 0-1 against Clemson.

Stanford is 3-3 with a 3-2 mark against Oregon and a 0-1 record against Michigan State.

Baylor is 3-3 against the other ten schools. They are 3-2 versus Oklahoma and 0-1 against Michigan State.

FSU is 3-4 with a 3-2 mark against Clemson and losses to Oklahoma and Oregon.

Georgia is 1-5 against the other ten schools. They are 1-1 against Clemson, 0-2 against Alabama, and 0-1 against LSU and Michigan State.

The information based upon the criteria outlined above lead me to believe that Clemson is the elite status in college football. I think you can call Alabama, Florida State, and Ohio State elite as well. I would probably put Oregon in that category, but the Ducks seem like they are on the way down. Some may argue for Michigan State and Stanford as well and I can listen to that argument. But I do believe few can argue against Clemson joining Bama, FSU and Ohio State as elite.

Dabo Swinney said yesterday that Clemson will win a national title soon. He said if not Monday night, it will be soon. I believe that as well, and I also believe this solidifies the elite status even more in the future.