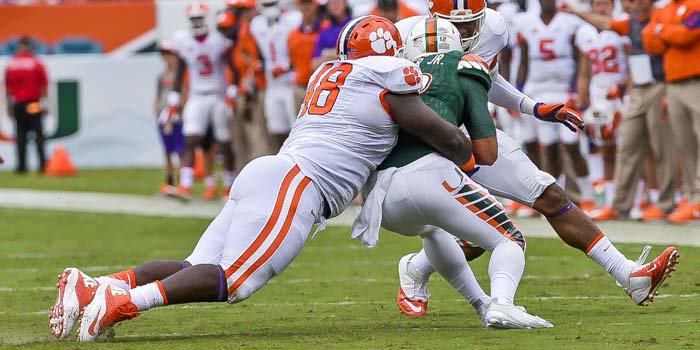 I am just a regular fan. I would like to ask a question about rushing chunk plays. It appears that opposing offenses see a defect in Clemson's defensive line, especially the right side. What is going on here and why can't Coach V make adjustments and get this corrected? Syracuse had 242 yds rushing yesterday, gains of 51, 30, 42, and 28 yd runs on four plays alone. This is quite noticeable from watching in the stands and on TV. And not just the Syracuse game either.

It has nothing to do with one side of the line. The Tigers rotate Wilkins, Watkins, Reader, Pagano and Byers throughout the game, and they move each guy to a different side every play. Sometimes the one technique is on the right side and sometimes the three technique defender is on the right side. What does happen is that sometimes an offensive line is stronger on one side, and their staff may feel more comfortable running to one side. What we saw Saturday was a majority of their chunk plays came with the option. Clemson looked confused by the misdirection and the option attack.

Hi Mickey, enjoy your blog each week. Just curious, as we don’t hear much from the media, what is the status of the investigation into North Carolina athletics? If what I read is true it would seem a major infraction has been committed, and the penalty would be just as major. Any insight you can give would be helpful.

The best place to find information on the UNC investigation is the Raleigh News and Observer. Their website is www.newsobserver.com. Last week they ran a story about two more employees fired. They have a comprehensive summary of the latest on their site. Just search UNC scandal on their site for the latest.

I would pose the question as to who we would like to play should we get to the playoffs. As it stands now, we would play ND, which I would love to see. The team that I fear the most is Bama, which would be the title game. Should we play ND, I think the game would be much different than the first for obvious reasons, but I still think we are the better team. Along these same lines, I think the committee should only show the top four teams without ranking them until the last poll. I think that would add an element of suspense and speculation leading up to the seedings and would be a fun conversation.

The next three weeks we will see more movement inside the top four. Clemson still has South Carolina and North Carolina. Alabama has Auburn and Florida. Ohio State has Michigan State, Michigan, and Iowa. Notre Dame has Stanford. Oklahoma State, Oklahoma and Iowa have a chance to make huge impressions in the three weeks. I would be surprised if the top four stay the same and in the same order. As far as matchups go, I think Clemson can play with anyone, and the Tigers present a difficult matchup for any team. Bama is a different challenge than Ohio State. Notre Dame is different than the top three. Let's see how the next three weeks play out.

Hope you and Ryan are doing well!

It's tough losing a talent this year of Mike Williams' caliber, his loss has certainly affected our deep-ball threat and red-zone capabilities.

I noticed in the NC State and Syracuse games, Deshaun's passes to Artavius Scott and freshman Deon Cain lacked the receivers' ability of high-pointing the ball.

Sammy Watkins, Nuk Hopkins, and Mike Williams were great at this; Artavius and Deon would surely benefit from the previous receivers techniques. Have you noticed the same thing??

We are great thanks for asking. You make a good point. They miss Williams. Deep ball threats do a great job of adjusting to the ball in the air. It is a difficult thing to do, and not everyone has that natural ability. Rod Gardner was great at it. Sammy and Nuk were as well. Mike Williams is as good as any we have had. Hopefully, he will come back strong next season. Scott is a great player, but he has not excelled on the deep balls this season. Cain is getting better every day and I think he can turn into a better deep ball threat soon. He is full of potential and has played well in the past few weeks.

If I promise never to point out if you have a single typo in your blog like some jerks, would you answer the following question in your Friday email bag? Of our current commitments and targets, who can enroll in January? Thanks. Love the blog and radio show. Go Tigers!

Thanks. These things change, but it is my understanding at this point the commitments that could enroll in January are Lamar, Pollard, Pickney, Anchrum, Davis, and Dawkins. The top uncommitted players that could enroll early are Shaq Smith, Bryan Edwards and Myles Dorn. Hope this helps.

How many scholarships do we have available for this next recruiting class, how many commitments do we have and who else is on the board? Thanks.

According to my unofficial lists, Clemson has 12 scholarship seniors including Davidson, Brooks, Peake, Sekinger, Norton, Gore, MacLain, Reader, Byers, Goodson, Lakip, and Brown. The issue will be which underclassmen leave either by graduating early or going to the NFL. I think Blanks, Burrell, and Aiken are graduating. Brooks has another year but at this time he says he is not coming back and is listed with the seniors. The highly ranked underclassmen that will have a decision to make are Lawson, Alexander, Kearse, Leggett, and Green. There has been talk of other players who have sent in their inquiries to the NFL people including Dodd, Watkins, Tankersley and Gallman. So all together 12 underclassmen have a chance but my guess is that six to eight could not be here in the spring. My best guesses at this point are Blanks, Burrell, Aiken, Lawson, Alexander, Kearse, Green, and Leggett. With 12 seniors and six to eight underclassmen leaving, the scholarship numbers for the next class could be 18-20. They currently have 14 commitments, so you could see four to six more commitments. There are others that could leave, and attrition is always a part of every program.

The remaining recruiting board consists of one wide receiver (Overton), one offensive lineman (Simpson), one defensive tackle (Lawrence or Gary), one linebacker (Smith), one corner (Mullen, Givens, Pride) and one safety (Edwards, Dorn, Stallings, Blue).