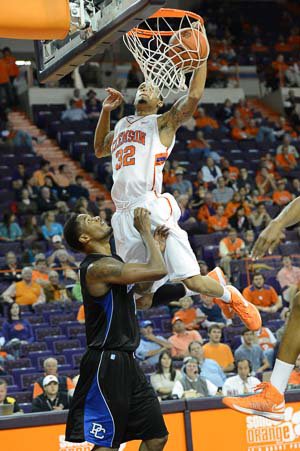 I believe I read on Tiger Net that KJ is going to return for his senior season.  With all of the success he has had this season and the opportunity to be a first round or even a lottery pick, do you think he would change his mind?  I really wouldn’t blame him if he did, but hope he does stay.  I think we could be really good next year.  The visibility he gives us could be a program changer.

I have not heard either way on McDaniels. In fact, if I had to guess my gut tells me he would not return but that is just is a guess. He has to decided in the first few days of April but I asked Brad Brownell

Brad Brownell
Head Coach
View Full Profile if he knows yet and he said he does not. Brownell and McDaniels will sit down and discuss the situation after the season. Brownell says the two have already talked some but the final discussions will wait until after the season.

I think many people are displeased with the start of the baseball team so far this season.  We got swept by the Gamecocks and suffered midweek beatdowns at the hands of Western Carolina and Georgia Southern (as of 3/18).  We also seen breakdowns in the bullpen, which was considered a strength of the team prior to the season, and games with several errors that have definitely cost us some victories.

It seems the program has been content with mediocrity the past few seasons.  My question, given the streak of early outs from NCAA regionals, falling behind our rivals on the diamond, and the recent changes in AD and school president, do you see Jack Leggett

Jack Leggett
Baseball Head Coach
View Full Profile possibly being let go after the season (barring a late season/postseason surge) and bringing in a new coach and staff to rejuvenate the program and get Clemson back among college baseball's elite?

I agree this season has been a disappointment so far. Dan Radakovich says he evaluates every program after the season is over and I think he will sit down with Leggett at that time. What comes out of that meeting will be determined by what happens in the final 36 games of the regular season and the post season. I don't think Leggett is in trouble at this point but the season's success or failure could change that. I do often hear from irate fans that want a change but I can't speak to what the administration thinks at this point.

Grreeat article on the 40 Years. I date back to the Bobby Roberts era and the OLD field house. We, at CU turn the other cheek awfully well when it comes to BB! The Dukey coach builds hate in in his players to inspire wining. It was said on TV one day last week by a Dukey  player.

So, Send Brownell a picture of yourself and start the hate trail to winning. We need it. Make the sacrifice and HURRY! Have a Grrreat day.

I regret that I never got to see a game in the olf Fike Fieldhouse. I heard it was awesome. I also heard it was dark and intimidating. Hopefully the new building will bring a better atmosphere to Clemson basketball. I think the biggest thing Coach K has done for Duke is recruit incredible basketball players. Attitude is one thing but Jabari Parker and his teammates are extremely talented.

Just wondering if you know how Clemson's non-conference schedule is looking for next season? Have those games already been scheduled? I know about the Paradise Jam tournament in St. Martin, but anything else?

Thanks for all your work,

I have not heard anything on the subject. I promise to ask Brownell after the season. Thanks for the kind words.

The no-call at the end of the Duke game will likely draw comments. However, we did not help ourselves going only 14 of 21 from the FT line. Duke shot 16 of 18 from the FT line. Assuming some of those misses were the first of a 1-and-1, we likely could have won the game with better "free-throw" shooting.

Thanks for the nice words about Ryan. He is doing great. He has been in West Virginia all week on a church mission. I will pass along your words of encouragement.

You are correct about the free throws. Clemson has shot free throws well most of the year but it did cost the Tigers last Friday night.