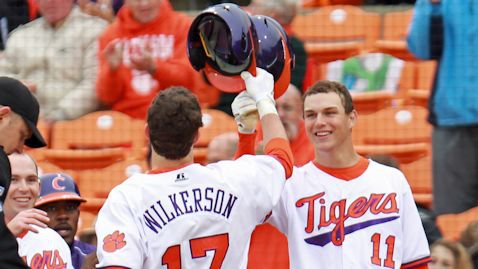 I am a novice when it comes to baseball standings. Could you tell me what scenarios would have to happen for Clemson to win the Atlantic Division this weekend? Thanks in advance and GO TIGERS!!!!!!!

I hope I can help. Since Clemson beat Florida State and NC State beat Duke last night, here is how each team can win the division:

NC State wins the division if Clemson and Florida State split the next two games and NC State beats Duke the last two games. NC State cannot win the division of Clemson or FSU wins both games or if they lose either of their last games.

I am not sure if that helps but that is every scenario I can think of for all three teams in the last two games.

Two very interesting articles on recruiting. In past years the Tigers focused on offense and defense in their recruiting cycles, and understandably so. What I like seeing is that we don't need to recruit emphasize either side of the ball to fill spots. I also like at most a 4 star level recruits. While some might think we have not arrived until we get multiple 5 stars, I tend to disagree. You recruit the player that meets the need; however, it would be good to see us go after higher level players than the occasional star recruit. It's all in perception, but sometimes perception can become reality.

Overall, we cannot be disappointed in what we have seen. I think we still have room to grow, which is never a bad place to be. Your thoughts?

I agree. Five star recruits are great but they are so few and far between. The national powers have built their teams with four-star players and developed them. I think Clemson is close to taking the next step and becoming an even bigger fish in the college football pond. The next two classes could be a big part of continuing that trend.

Has any reason been offered by the ACC office about why the third NC State-UNC game will not be made up if necessary, since it eliminates Clemson's tiebreak advantage over the Pack? (or will it if State is 1/2 game ahead?)

If State is a 1/2 game ahead then they win the division. Unfortunately the league does not make up rainouts on the final day of a series. School and schedules don't allow time for this. I hope that rainout will not cost Clemson the division but that is a distinct possibility.

I never understand the recruiting math ... every year, Clemson (and the ACC for that matter) have "limited" number of scholarships available.

However, the SEC routinely signs 30+ classes, even with Slive's imposed limit.

Why are the other conferences not willing to challenge the SEC on this practice?  There's a lot of $$$ involved with the BCS.  Can't see big conference brass just letting the SEC slide on this.

Also, I would think the SEC would have burned enough bridges with high school coaches to start affecting their recruiting (ie, one of their kids loses a scholarship 2 years in because he ain't challenging the two-deep)... yet every year, kids sign with Bama and UGA, even though both are already 4-5 deep at their position.

When is the NCAA gonna start enforcing Academic Progress Rate?

On a side note, how many former walk-ons will be on scholly this year at CU?

The SEC has oversigned as much as any conference in the country and it has paid off. Most schools are scared to "run off" players but the SEC has little problem with it. But those numbers eventually catch up. For example, South Carolina says they won't sign more than 15 players this year. The success of the SEC trumps any high school coaches opinion of their tactics. In theory this could catch up to them but in reality it does not. The NCAA is already enforcing APR penalties but that has not a significant difference yet. On the scholarship deal, at this point Catanzaro is one. If they have leftover scholarships come August because of attrition then walk-ons will be added.

Hey Mickey - I read with interest, your crossroads blog. I can't help but agree with you on several points.  I do think that usc (sorry, I can't bring myself to capitalize those letters) has done a better job of selling itself to the state of SC. I see their ads on TV in other parts of the state, not just Cootumbia. Clemson's TV ads , shown during our games, the determined spirit ads, are very good, and could be shown 12 months a year, and would be a great plug for Clemson.

I do believe that Pres. Barker has sought for Clemson to have  somewhat of an elitist attitude. I do think that Barker has been a good President, but I also think he has wanted to exclude a lot state students who qualify in high school, in favor of those more qualified out of state and foreign students, who will pay more and get more grant money coming to Clemson. I just had a son graduate last Friday from Clemson , and we are born and bred South Carolinians, but out of high school, my son did not qualify and went thru the Bridge program. He graduated and is a proud Clemson Alum. We have another son who is a rising junior, but he to went thru the Bridge . I have seen excellent, high standard students  in high school, that were qualified to enter Clemson turned away. I think Pres. Barker only wants the best of the best, nothing wrong with that, but Clemson was founded to educate SC students first.

I love Clemson Univ. and all she stands for. I truly think Clemson is the flagship university, in this state. But the BOT and University leaders do need to push the PR more than is being done now. To take advantage of the beautiful campus, the athletic spirit, the small downtown, the hometown feeling and of course the great education that is available.

Thank you for your continuing blogs on great subjects. Hopefully someone is listening and reading at Clemson.

Thanks for the email. I know you are proud of your sons. I am not sure how the new president will feel about the issues you mentioned above but I hope Clemson will move forward in helping our in-state kids.

I read your blog "Crossroads" today.  I think your contact's comments regarding South Carolina mixes apples with oranges.  Clemson charges a higher tuition because the wonderful legislature has essentially stopped funding higher education.  When I graduated from Clemson, the state of South Carolina contributed funds to cover 80-90% of the university's budget. That figure is down to less than 15% now.  So, think about it.  Tuition has risen because someone has to pay the bills.  The university has to seek sources of revenue.  Tuition makes the most sense.

As for the "marketing" done by USC, I would like clarification on this issue.  Is this person talking about sports marketing?  If so, then that is entirely influenced by the enormous advantage that SC has from ESPN's contract with the SEC.  Baseball titles and success in football help promote a college.  We know that from research done by economists.  However, comparing marketing success from sports with the way Clemson manages the university makes no sense.

People are proud of the position that the university has built on a national level, but they seem to ignore the fact that a premium reputation is not accomplished for free.  College is not for everyone.  Great colleges are especially not for everyone.  So, if you want Clemson University to be more affordable, then tell the legislature to think of funding higher education in the state.  Otherwise, the socio-economic reality is that per capita income and level of education are highly related not just in SC, but throughout the US.  Sadly, that means that young people from low to moderate income struggle to pay for college everywhere, not just at Clemson.

A main reason why the percentages of the budget went down is because the spending increased. At one point the spending at Clemson tripled over a 15 year period. If you go from spending $300 million per year to spending almost $900 per year then the percentage of any one aspect of revenue will obviously go down. One million of $900 million is a much less of a percentage than one million of $300 million. Clemson had a spending issue. The legislatures also chose to support education with scholarships through the lottery instead.

It is clear to me that USC spends more on marketing too. Their billboards are everywhere. Its not just athletic marketing.

If you want a clear picture of where Clemson stands in-state you should ask guidance counselors. They have the real data.

That would seem to make sense but that is not always the case. US News and World Report changed their criteria for ranking colleges to include guidance counselors in high schools. That year Clemson spent a ton of money bringing in guidance counselors for a few days. They put them up at hotels and feed them and had them tour the campus. They were given the full court press on all of our advantages. I thought is was a brilliant new strategy if rankings were the goal. If someone gave me these perks then I would probably speak more highly of them. The point is that almost all information has some sort of bias.