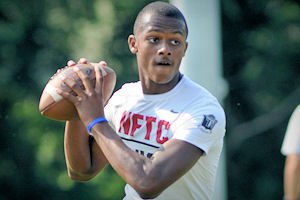 Deshawn Watson comes into the 2014 season as one of the nation's top freshman quarterbacks but he also knows the difficulty freshmen have at the position.

A season ago Winston completed 257 of 384 passes for 4,057 yards for 40 touchdowns and only 10 interceptions.  Those are X-Box numbers for any quarterback but especially for one who had never taken a college snap heading into the season.

There were other successful freshmen signal callers last year.  At Penn State Christian Hackenburg went 231 of 392 for 2,955 yards for 20 touchdowns and 10 interceptions in helping the Nittany Lions to a 7-5 mark as a true freshman.

Trevor Knight did not start until late in the season at Oklahoma but helped lead the Sooners to impressive victories including an upset of Alabama in the Sugar Bowl.  For the season Knight went 79 of 134 for 819 yards with nine touchdowns and five picks.  He also rushed for 445 yards and two scores.  The Sooners were 12-2 last season.

Maty Mauck played a key role last season in the Tigers SEC East title run when James Franklin went down.  The freshman went 68 of 133 for 1071 yards with 11 touchdowns and only two picks.  Missouri went 12-2 last year.

Nebraska was forced to play freshman Tommy Armstrong last season and went 9-4.  Armstrong went 68 of 131 for 966 yards with nine touchdowns and eight interceptions.  He also rushed for 202 yards and two scores.

Davis Webb of Texas Tech completed 226 of 361 passes for 2,718 yards for 20 touchdowns and nine interceptions for an 8-5 Red Raider squad.

Many times a freshman quarterback means rebuilding or building for the future.  In some cases like Winston, Hackenburg, Manziel and Knight the players were talented enough and had enough talent around them to still win at a high level.

Freshman quarterbacks often times mean mistakes and growing pains, but those freshmen grow into sophomores and the mistakes are often limited because of the experience.

Clemson is fortunate this season in that Watson is not forced into action unless there is an injury to Cole Stoudt or Stoudt is not effective.  I believe we will see Watson early in the season and we could see more of him as he becomes more comfortable.  If you believe what the recruiting services say and what the Clemson staff says about Watson, the future is bright.  The main question is how soon that future will be seen.