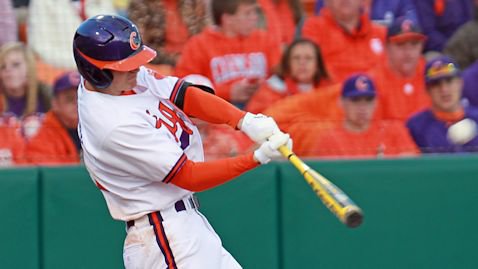 Some Tiger fans have been frustrated with the inconsistency in the basketball and baseball programs over the past couple of seasons. Several times over the past two seasons in both sports many of us have been looking for that spark to kick start a long winning streak, only to be disappointed by a loss or string of losses.

It seems like as soon as we got a good feeling about the Tigers taking one step forward, they would disappoint us with two steps back.

Personally I have been pretty down on the baseball and basketball programs the last two years but feel better about baseball with the addition of some talented freshmen. Still, this season has seen its share of disappointments with series losses to South Carolina, Virginia and North Carolina.

However, Monday night's win at top-ranked North Carolina is the latest ray of hope. The Tar Heels were 25-1 coming into the series finale against the Tigers but Clemson gutted out a 5-4 win in extra innings.

The win moves the Tigers record to 17-11 overall and 6-6 in the Atlantic Coast Conference. Clemson is two games behind FSU with forty percent of the ACC season complete.

The other reason for hope is the remaining schedule. So far the Tigers have played ACC series at NC State and at North Carolina and home conference series with Duke and Virginia. State is 5-7 in the league and Duke is 6-6 but Virginia is 9-3 while North Carolina is 9-2.

Clemson has remaining home conference series with Wake Forest who is 4-8 in the league, Georgia Tech who has an 8-4 conference mark and Maryland who is 4-8.

The Tigers remaining road conference series come at Boston College who is 0-11, Miami who is 5-7 and FSU who is 8-4.

The four teams Clemson has played this season have combined for a 29-18 mark in the conference. The remaining six teams on the conference schedule are 29-42.

In the latest Collegiate Baseball poll North Carolina is ranked number one, Virginia is sixth, and NC State is 25th. So three of the four teams Clemson has faced in the conference are ranked. Of the final six teams left on the schedule, only two are ranked. Florida State is seventh and Georgia Tech is 15th.

The non-conference games get a little more manageable as well. Clemson has three games with Georgia Southern, two games with Western Carolina and Furman and single games with Presbyterian and USC-Upstate.

The weather has forced us to be patient waiting on spring and Clemson baseball fans have been patient waiting on this talented freshman class. Hopefully big things are coming to this program in the last 28 regular season games and beyond.

Clemson has played 28 games and has 28 remaining in the regular season. My guess is that the last half of the season will yield a record that is better than the 17-11 mark of the first half.