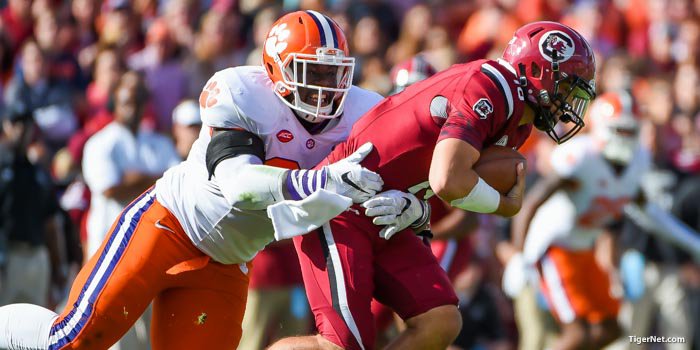 This is a crazy time of year for Clemson football. Last week the staff tried to sneak in a few in-home visits with prospects, but the majority of the staff is on the road this week recruiting. This is the final week of recruiting until January due to the upcoming dead period.

It is also exam week at Clemson and the players are doing their best to keep up the high standards in the classroom. However, some players will miss time due to a busy award presentation schedule.

According to their websites, here are the awards that will go out this week and the Tigers competition for each award:

One award was given out Monday night. Tyler Matakevich is the winner of the Bronko Nagurski Award, which is awarded annually to the nation's top defensive player. The Temple linebacker accepted the honor from the Charlotte Touchdown Club in conjunction with the Football Writers Association at a banquet Monday night in Charlotte. Matakevich beat four other finalists: Duke defensive back Jeremy Cash, Clemson defensive end Shaq Lawson, Penn State defensive end Carl Nassib and Alabama linebacker Reggie Ragland.

The Rotary Club of Houston sponsors the 2015 Rotary Lombardi Award, presented annually since 1970 to the nation’s top college football lineman.

The winner will be announced tonight.

The winner will be announced December 10th at the Home Depot College Football Awards Show on ESPN.

The Walter Camp Trophy is awarded to the outstanding player of the year.

The finalists for the award are:

The winner will be announced December 10 on ESPN Sports Center.

The winner will be announced on ESPN December 12.

This year's other finalists were:

The Eddie Robinson Award goes to the nation's top head coach. It will be awarded on December 16.

The George Munger Award is presented to the NCAA Division I college football coach of the year by the Maxwell Football Club.