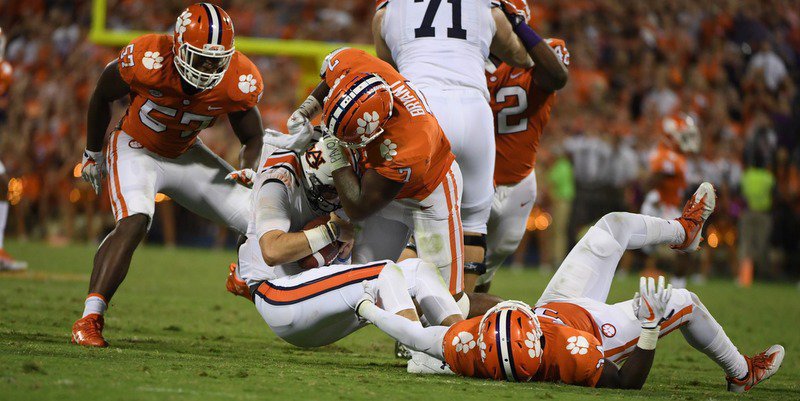 Saturday night’s 14-6 win over Auburn continued a stretch of incredible wins in Clemson’s football program. This one fits right in line with some of the great wins we have seen in recent years. Since 2012 Clemson has beaten Auburn and South Carolina three times, Ohio State and Oklahoma twice and has wins over Alabama, Georgia, LSU and Notre Dame.

Great teams can win different types of football games. Clemson has proven that once again. Not many saw a 14-6 victory, but this one was beautiful in many ways.

The defense was as dominant against a ranked team has any time I can remember. It was a record-setting game with 11 sacks which was just one away from a school record. Clemson harassed Auburn quarterback Jarrett Stidham all night.

The numbers were exceptional. Clemson held Auburn to 13 first downs, 38 rushing yards on 42 carries, and a total of 117 yards on 66 plays. Auburn was held to just 1.8 yards per play.

The defensive line was exactly what we thought they would be in the preseason. Christian Wilkins had ten tackles including two tackles for loss and 1.5 sacks. Dexter Lawrence had a half of a sack and disrupted all night. Clelin Ferrell had a sack and forced a fumble. However, the star up front was Austin Bryant who had seven tackles including four sacks and a quarterback hurry.

The defense played well at all three levels. Dorian O’Daniel had 14 tackles including 1.5 sacks and two tackles for loss. I thought the secondary played as well as I have seen against a ranked opponent. Trayvon Mullen, Mark Fields, AJ Terrell, Ryan Carter, K’Von Wallace, and Tanner Muse played outstanding. Auburn Review

Perhaps the defining moment of the game was the defense holding Auburn to a field goal after Ray Ray McCloud fumbled at Clemson’s 10-yard line. It felt like Clemson turned the momentum on defense after that confidence boost. Auburn gained 69 yards on the first drive. Their next 11 drives netted 48 yards.

Offensively it was not a thing of beauty, but give Auburn a lot of credit for that. Clemson did manage 18 first downs and 281 yards of total offense. Much of the struggles on offense was Auburn at the line of scrimmage, and they're selling out at the line of scrimmage. Clemson had issues at right tackle with Sean Pollard and Tremayne Anchrum. I also am not sure of the talent currently at running back.

However, Kelly Bryant played well at quarterback, and he was helped out with very good performances from Hunter Renfrow, Ray Ray McCloud, and Deon Cain. The veteran wide outs were a huge part of the game plan. Bryant was on the money on several key third down throws including a terrific pass to Renfrow to seal the victory.

Clemson special teams were solid despite Huegel missing badly on a 46-yard field goal. The kick coverage was very good, and Clemson played at least on even terms in that department.

In summary, so many players made big plays in this win. This was a great victory that marked the fourth consecutive win against Auburn. It was the 33rd win of the last 35 games and 24th home win in the last 25 games. Clemson's defense held Auburn to its lowest offensive production under Gus Malzahn.

Finally, it was a great night regarding what prospects got to see due to the incredible environment once again inside Death Valley. The stars were out on the field, but many were on unofficial visits as well, so maybe the best is still yet to come.