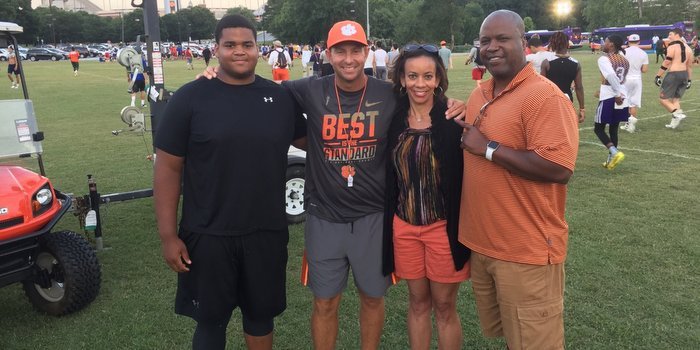 With Dabo Swinney’s high school camp, comes a flurry of new offers and 2019 4-star defensive tackle Jacob Lacey was the second offer of the day.

The 6-2, 295-pound Bowling Green (KY) South Warren prospect received an offer after his second day of workouts at Swinney’s camp.

He told TigerNet prior to camp that he knew if he caught the attention of defensive coordinator Brent Venables that an offer was possible.

“He (Venables) was telling me that he can’t wait to see me at one of the camps,” Lacey said. “He told me to be ready and that great things will happen at camp if I perform well, so I’m just getting ready for camp season. I can’t wait to get back over there.”

Lacey started as a freshman and helped his team win a Class 4A state championship while going 15-0. In 2016, Lacey was named second team All-State and second team All-USA Kentucky honors after his team finished 9-5.

Lacey has also earned a 4.0 GPA and received academic all-state honors during his first two years of high school.

To God Be the Glory! I received an offer from the National champs, Clemson Tigers !! @CoachToddBates #GoTigers Man, Look at God!! pic.twitter.com/iFtDjN2K6t