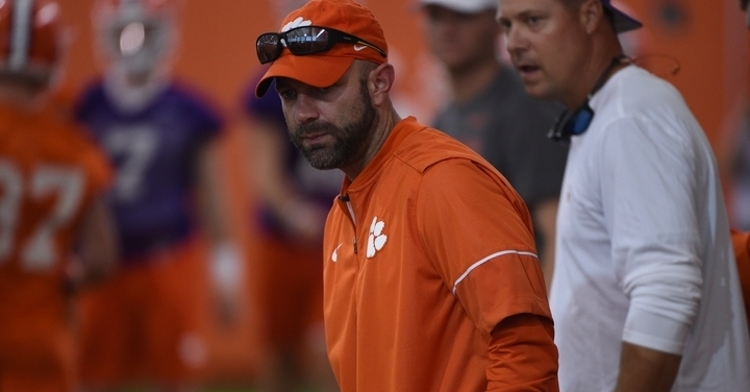 Kyle Richardson looking on at a recent Clemson practice

Transitioning to college can be an exciting but often stressful time for student-athletes.

One of the more vital jobs in that capacity at Clemson has been Brad Scott who had previously served as a liaison between Clemson and high schools in securing documents needed to gain admission to Clemson University.

Scott had been with Clemson since 1999 in various capacities, including as an assistant coach, offensive coordinator, and assistant athletic director.

He is now working at USF alongside his son Jeff who is the new head football coach.

Dabo Swinney said at the end of his press conference Wednesday that they have a replacement for Brad Scott.

"Kyle is going to move into that role," Swinney said. "Kyle Richardson will be amazing. That's our Director of player development, and freshman transitions is what we call that, and that's a huge role. Kyle is a natural. I mean, he's just great. He gets it. He's dealt with high school seniors you know his whole life. So he's going to be awesome."