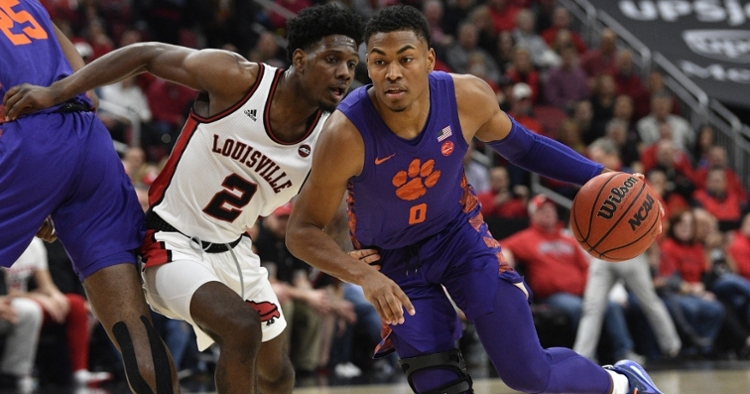 Clemson will look to rebound at home versus Syracuse on Tuesday. (Photo: Jamie Rhodes / USATODAY)

The ACC-leading No. 6 Louisville Cardinals used a hot-shooting first half to cruise in a 80-62 win over Clemson.

Trailing 47-26 at the break, Clemson (10-9, 4-5 ACC) connected on just 4-of-18 3-point attempts, while Louisville hit more 3-pointers (5) in only seven attempts and made 66 percent of its shots overall. Clemson finished with the most 3-point attempts in the Brad Brownell era (38), making eleven.

Leading Clemson in scoring this season, Aamir Simms was held scoreless on four shot attempts after 20 minutes and finished with only four points, a season-low in conference action.

Clemson mounted a 9-0 run in the final minutes to cut the Cardinals lead to 13, but a second-chance try from Steven Enoch extended Louisville edge and kept the Tigers at bay. Darius Perry finished with a game-high 19 points and Enoch scored 11 and grabbed seven rebounds. Clyde Trapp led Clemson with 11 points and Alex Hemenway scored a career-high eight points.

Louisville is off to its best start since joining the ACC (17-3, 8-1). The 80 points were a season-high surrendered by the Tigers.

Clemson had won four of its previous five ACC games to reach double-digit wins on the season and .500 in ACC play. They host Syracuse next on Tuesday at 7 p.m. (Fox Sports South/RSN).

"Louisville was really ready to play today. I'm disappointed that we didn't play better. We got punched in the mouth early on. I think that we let our missed threes affect our defense. It was energy-draining. We didn't compete like we normally do defensively, and Louisville was sharp."

On the performances by freshmen Al-Amir Dawes, Alex Hemenway and Chase Hunter:

"I'm really proud of those guys. Chase showed a brief glimpse of what we think that he's capable of. You saw some really talented plays from him. That took guts for Alex to play like that. He had a bunch of family and friends here. It was basically a home town game for him, and he showed good confidence. Al showed great spirit in the second half. For those guys to fight the way that they did in that environment is something that I'm really excited about."

Clemson vs Louisville Box Score
ONE DAY ONLY! Fanatics.com Black Friday Sale 20% off on orders over $75
Comment on this story