Clemson alum Chip Smith recently sent us an interesting story of firing the cannon at Williams-Brice in 1973.

Smith's take: I was the Cannon Firer my first year on the squad in 1973. (Unlike today, back then, the Cannon Firer was a member of the cheerleading squad.) Attached is a picture as it looked in 1973. The cannon is a long-standing Clemson tradition. Despite its noise, it really is very small, and "shoots" a shotgun shell filled with black powder. You load the shell in the back of the cannon and pull a rope attached to the firing pin.

The Cannon Firers are about the only people outside of players and coaches who get to run down the hill, though admittedly, it is only about ½ the hill as you start from the terrace that the players like to jump off of on their way down. Still, quite a thrill, I can assure you! The cannon is mounted on hand trucks. Some stadiums will not allow you to bring it in.

Such was the case in 1973 at Williams Brice, but where there's a will, there's a Clemson way. Like I said, the cannon is mounted on hand trucks so in Columbia that day we simply draped the huge Clemson flag that the cheerleaders run onto the field with as the team enters before kickoff over the hand trucks, covering the cannon, and rolled it in – hiding it on the sideline after that under assorted jackets. We had stretched the south-bound opening of a rubber chicken filled with newspaper over the end of the barrel. Right after the coin toss, I uncovered the cannon, dashed out to mid-field, and fired it sending obliterated pieces of newspaper and rubber chicken into the air. About a dozen highway patrolmen swooped down on me. They allowed me to stay, but they confiscated the cannon until the administration could negotiate its release after the game.

Our advisor, Dean Deloney, was not amused. 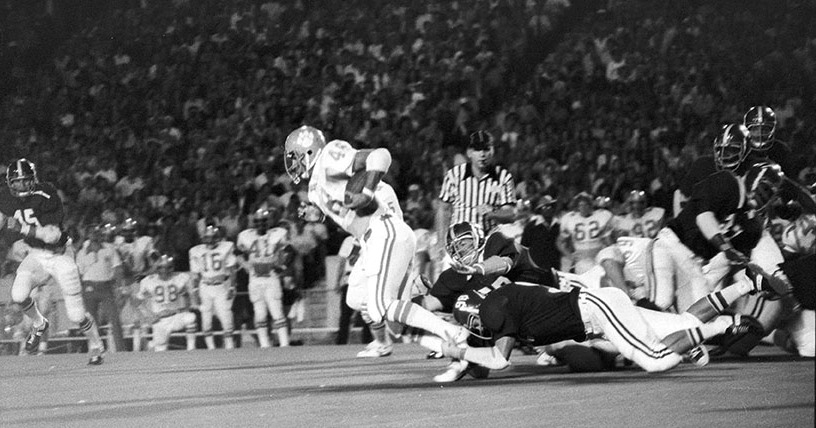 Smith's take: In 1975 we traveled to Tuscaloosa to face Paul “Bear” Bryant and Alabama. Back then Alabama played its big games in Birmingham. They only played the non-conference “pushovers” in Tuscaloosa. The game picture shows Don Testerman running the ball. We lost 56 – 0. Looong night. It’s still hard for an old-timer like me to comprehend the football powerhouse we are today!