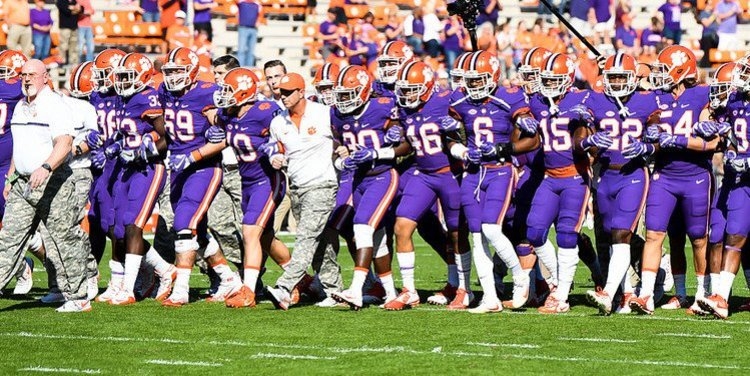 CLEMSON, S.C. — Clemson University will celebrate Military Appreciation Day on Saturday during the football team’s 7 p.m. game against Duke, and the university has a full slate of activities planned throughout the day and throughout the week in conjunction with the event’s 25th anniversary.

The game is part of Military Appreciation Week, as earlier today, Clemson University Staff Senate hosted a Veterans Appreciation Reception in the Walter T. Cox Plaza for all Clemson faculty and staff members that are veterans. On Wednesday, flags will be placed on the Scroll of Honor Memorial at 5 p.m. All are welcome to attend and participate in this ceremony.

On Saturday, Bowman Field will feature displays from the Army, Air Force and Marines. The displays will include military ground vehicles, helicopters and interactive areas that can be enjoyed by those of all ages.

Following a Tiger Band performance in the amphitheater, a military parade — along with the Tiger Band — will roll from the Holmes and McCabe dormitories around 6 p.m.

Prior to the game, South Carolina families of Fallen Soldiers will be introduced on the field and join the Tiger Band for the patriotic portion of its pregame show. There will be several special guests and high-ranking military officials in Memorial Stadium for Military Appreciation Day. In-game military recognitions will include the introduction of these officials, the hero-of-the-game and the Purple Heart Spotlight.

All veterans and active-duty military members are invited to come down to the field and be recognized during halftime. Participants should go to portal X in the WestZone or enter through the visitor’s tunnel (Gate 10) with five minutes remaining in the second quarter.

During halftime, the Tiger Band will play the “Armed Forces Medley,” and all veterans and active-duty military members are asked to stand to be recognized when their branch’s song is played. Veterans will be recognized in the west end zone by branch during this time as well. A fallen soldier tribute will take place with the solider cross and a 21-gun salute in the east end zone, ending with the playing of “Taps.”

Fans who have a ticket to this game and are unable to attend are encouraged to donate their tickets to a veteran by visiting http://clemsontigers.com/militarytix.

Clemson-branded Operation Hat Trick (OHT) products will be available online at http://www.shopclemsontigers.com and in-venue during the game, as well as at other local retailers such as Tiger Sports Shop and Academy Sports. OHT is a non-profit organization that increases awareness, support and funding for the recovery of wounded service members and veterans through the sale of branded merchandise, proceeds of which are distributed to selected organizations that support OHT’s mission.

Clemson was one of the first universities to adopt the OHT program when it launched as a national brand in 2012. Last year, Clemson was the top selling OHT collegiate partner and received recognition from OHT as a finalist of the OHT Excellence in Service Award. This award is presented to universities that demonstrate a strong commitment to OHT and OHT’s military support mission. As a recipient of the Service Award, OHT donated $3,500 in Clemson University’s name to Purple Heart Homes – Golden Chapter in the local marketplace.

All of the week’s initiatives and events are representative of Clemson University’s deep and sincere gratitude for the sacrifices made by active military members and veterans.