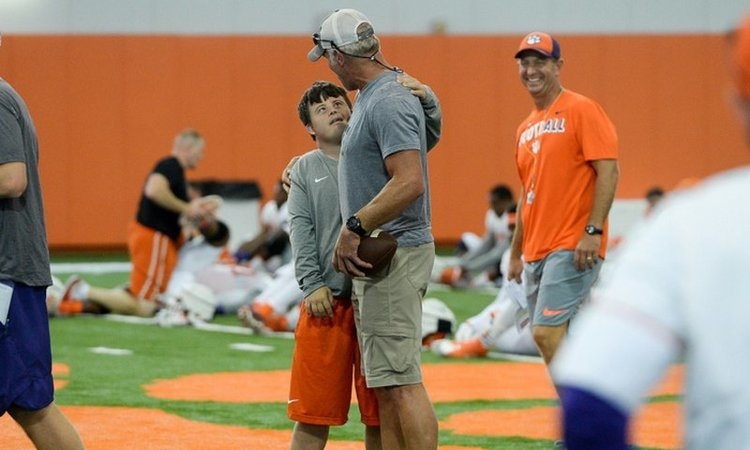 Saville has been a fixture of the Clemson football program. In August, he met NFL hall of famer Brett Favre at practice.

Saville, who has Down syndrome, has been a centerpiece to the Clemson football program since 2011 and has graduated the ClemsonLIFE program with the school as well.

David graduated from Norcross High School in 2008. Among his many other school activities such as Drama Club, being named Homecoming King in 2008 and participating in Special Olympics basketball, track and bowling during his high school years, he also served as a varsity football manager for five years and was named “Football Manager of the Year” there twice.

David became an Eagle Scout in 2007 at age 17. In 2008, he was a recipient of the Atlanta Alliance on Developmental Disabilities Outstanding Achievement Award.

Check out more of his story in an ESPN College GameDay feature in the last couple seasons:

Clemson's David Saville is the 2018 recipient of the Walter Camp American Hero Award. Saville is 1 of only 5 recipients in the award's history. Saville serves as Clemson's equipment manager despite being born with Down Syndrome, & is said to bring joy with him wherever he may go. pic.twitter.com/VeSuXmu39M