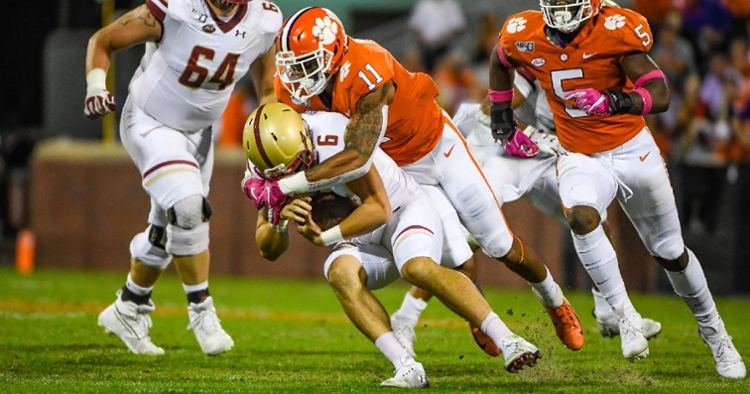 Simmons was PFF's selection for the most versatile player in college football.

Clemson and Ohio State led the way in 2019's highest-graded players, according to Pro Football Focus.

Both schools had five in the site's top-101 grades, which placed LSU's Joe Burrow on top, then Ohio State's Chase Young and top-10 Clemson reps with Isaiah Simmons (5) and Trevor Lawrence (6).

"Simmons had our vote for the Paul Hornung Award as the nation’s most versatile player in 2019," PFF's Cam Mellor writes. "He put forth elite grades across the board and just couldn’t be contained. Despite logging snaps at nearly every position on defense, Simmons graded below 62.3 in only one game and even went as far as finishing 12 games with well-above-average game grades. He was dominant against the run, with his tackling and when he rushed the passer, but he was at his best in coverage. He rushed the passer just 72 times and came away with 30 total pressures, including eight sacks, four hits and 18 hurries. He saw 359 snaps against the run and made a run stop on 22 plays."

Travis Etienne led PFF's running back grades at No. 13 overall.

"No running back in the PFF College era has done the kind of things that Etienne did in 2019," Mellor said. "He shattered the previous record for most missed tackles forced per carry, setting the new benchmark at 44% (previously set at 33% by David Montgomery). He also became the first running back in the PFF College era to break 80 tackles before reaching 200 carries, and he subsequently became the first running back to reach 90 forced missed tackles without totaling 250 total carries. Put simply, the fact that Etienne ran for 1,606 yards, 1,044 yards after contact, 19 touchdowns, 53 first downs and 90 missed tackles forced all without reaching more than 16 carries in a single game this year is astounding."

Clemson's Tee Higgins rated as the third-best receiver, one spot overall behind Biletnikoff winner Justin Jefferson of LSU at No. 17.

Tigers safety K'Von Wallace rounded out the top Clemson grades at No. 89.

"Moving freely about the defense like his teammates, Wallace had a statistical season like he’d never seen before for the Tigers in 2019," Mellor writes. "He set career-highs across the board but markedly in total QB pressures (13), and he blitzed the quarterback just 53 times to do so. On the backend, he was the primary coverage defender on 47 total targets, allowing 27 receptions and no catch longer than 35 yards while making 10 plays on the ball and allowing just one touchdown in his coverage. Perhaps the biggest improvement to his game was his tackling skill, as he also set a career-high in tacking grade. He attempted 73 total attempts and missed just six of those this year; 55 of them went down as solo tackles and another 22 went down as a defensive stop."