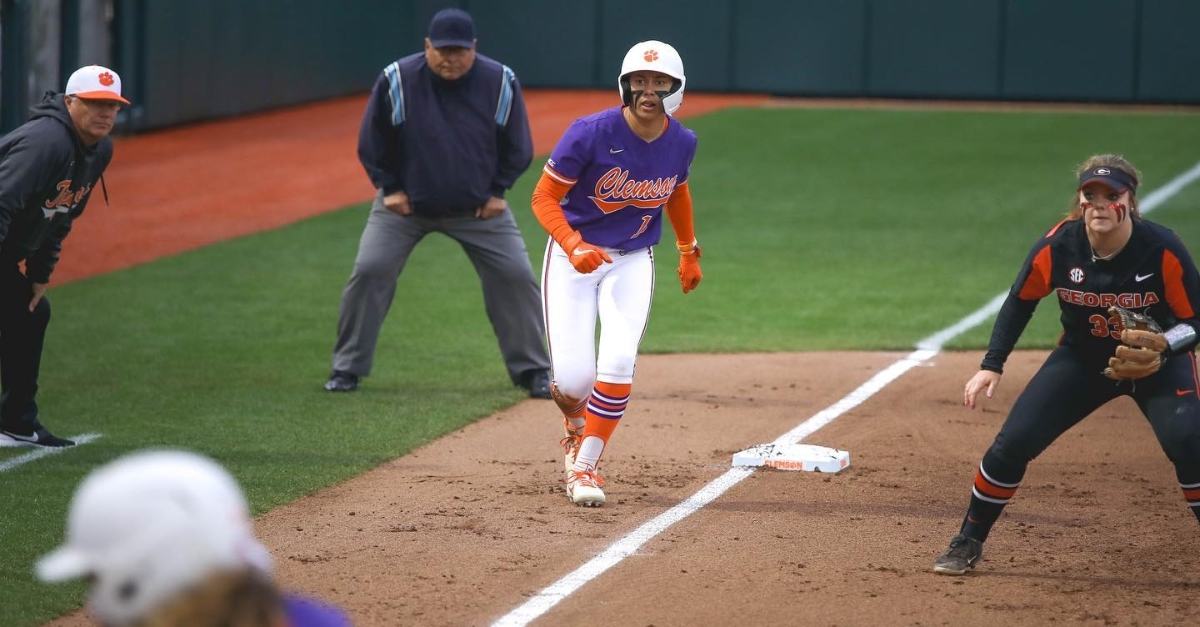 Logoleo gets a lead off third (Photo courtesy of Clemson softball)

CLEMSON, S.C. – The Clemson Softball team, now 11-7 overall in its inaugural season, picked up its first win against a ranked opponent Wednesday evening after defeating No. 14 Georgia, 4-1, at Clemson Softball Stadium.

The Tigers finessed a four-run inning in the bottom of the fourth, which was highlighted by MK Bonamy’s two-RBI single to give Clemson a 3-1 lead before JoJo Hyatt knocked in Bonamy to score the final run of the game. Freshman right-handed pitcher Valerie Cagle earned her sixth win of the season in the circle for the Tigers, while the Clemson offense produced four runs on Georgia’s Mary Wilson Avant, who entered Wednesday’s matchup with a 1.28 ERA on the season. With the loss, the Bulldogs fell to 15-4 on the season.

“I mean obviously it's huge for our program,” said Clemson Head Coach John Rittman. “To get a win against a ranked team as a first-year program is pretty spectacular. I told our team, ‘you know, we can compete with anybody.’ It's a matter of us improving game to game, working hard, and believing in each other, and our team has done that.”

Cagle was dominant in the circle, recording her sixth complete game of the season. On the night, she only allowed three hits and recorded 20-of-21 outs within the infield.

Bonamy led the Tigers’ offense, going 1-for-3 at the plate and driving in two runs in the fourth inning. Freshman outfielder Alia Logoleo went 2-for-3 at the plate, including a double to the wall in the bottom of the third. Logoleo extended her hitting streak to five straight games. Redshirt freshman JoJo Hyatt was 2-for-2 on the night and drove in her sixth RBI of the season in the bottom of the fourth.

Redshirt sophomore Valerie Frank made her Clemson debut in the bottom of the sixth inning, pinch running for Hannah Goodwin who exited the game due after being injured on a hit by pitch. Frank joined the team officially last week before the Tigers’ road trip to Kissimmee, Florida. Redshirt freshman Arielle Oda, who replaced the injured Goodwin at short in the top of the seventh, recorded two outs to seal the ball game in her first appearance at the position.

The Bulldogs struck first in the top of the third, scoring on a passed ball with two runners in scoring position and two outs, but Cagle retired the next batter, leaving one Georgia runner stranded.

Clemson rallied in the bottom half of the fourth, using six consecutive hits - all of them singles - to take the lead. The rally started with back-to-back singles from Cagle and Marissa Guimbarda. Then, Goodwin smacked a single through the left side, driving in Cagle from second, to collect her 13th RBI of the season and tied the game, 1-1. Then, Bonamy’s single gave the Tigers their first lead of the game as she roped a two-RBI single down the right-field line, which put Clemson in front, 3-1. The Tigers scored four runs in the bottom of the fourth on six hits en route to taking a 4-1 lead.

Cagle slammed the door shut on any Georgia hope of a seventh inning rally, using just 10 pitches to retire to record the final three outs of the game and hand the 14th-ranked Bulldogs their fourth loss of the season.

Up next, the Tigers host their inaugural ACC series against Virginia (8-5) this weekend at Clemson Softball Stadium. First pitch for Friday’s contest is scheduled for 6 p.m.

“We’ll have a light workout tomorrow and get ready for Virginia. We know that for us to make the ACC tournament, we’ve got to win our home series. Virginia presents a tough opponent for us this weekend. If we play like we did tonight, we’ll be fine.”