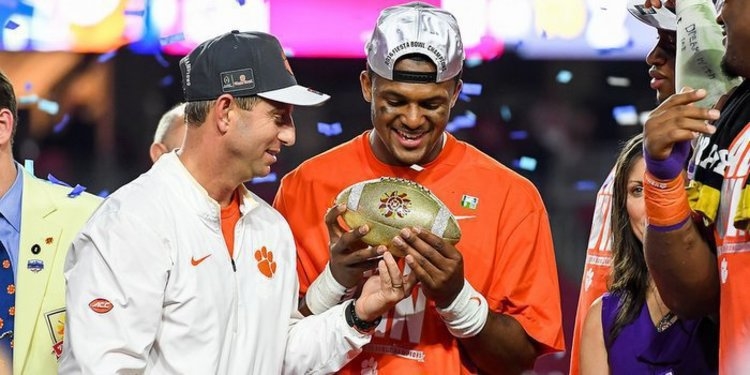 The ACC Network launches Thursday night at 7 p.m. and ESPN decided to take a look back the best players in the conference's history with an all-time All-ACC team.

Deshaun Watson led the way at QB on the first team.

"In his three seasons at Clemson, Watson changed the entire perception of the program," ESPN writes. "As a freshman, he threw for six touchdowns in his first start and ended a five-game losing streak to rival South Carolina while playing with a torn ACL. Finally healthy as a sophomore, Watson finished third in Heisman voting, accounted for 47 touchdowns and took Clemson to within a breath of winning a national title. A year later, he finished the task, setting an ACC record with 4,593 passing yards and 41 touchdowns, none bigger than his final throw to Hunter Renfrow in the end zone to win the national championship."

Joining Watson on the offensive first team was Clemson Hall of Famer and 1977 ACC Jacobs Blocking Trophy winner Joe Bostic and C.J. Spiller got the nod as an all-purpose pick, compiling over 7,500 all-purpose yards in his time as a Tiger.

The list limited to selections from players whose teams were actually in the ACC at the time that they played (i.e. no Big East Miami and Virginia Tech players and the like) and current players were not included either.