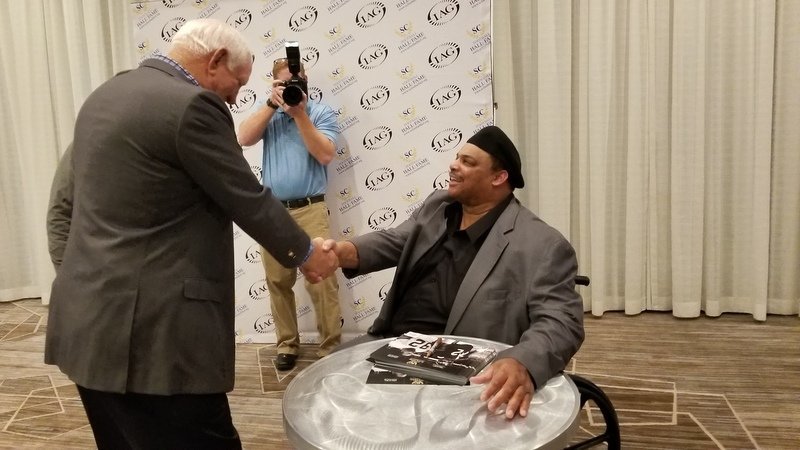 William Perry is all smiles Thursday in Greenville

GREENVILLE – Danny Ford walked into the room, scanned all of the faces and broke out into a big smile when he spotted William “The Refrigerator” Perry sitting at a table signing autographs. Ford walked over to Perry, who was dressed in a nice sports coat and natty beret, and said, “What’s up, Pierre?”

Perry, laughing at the subtle jab at his headwear, launched into his own megawatt smile and clasped the hand of his former head coach. Two Clemson legends and a room not quite big enough to contain both personalities.

Perry was at the Embassy Suites in Greenville Thursday with Ford and his brother, former Clemson and NFL defensive lineman Michael Dean Perry. The brothers did a question and answer session as part of the South Carolina Football Hall of Fame Legends Speaker Series. Ford, who is in the College Football Hall of Fame and coached the Perry brothers, was also in attendance at the event and facilitated the Q&A portion of it.

William has battled his weight and his health for years, and stories from the past few years painted a grim picture and prognosis for a player beloved not only for his play on the field but his larger-than-life personality that made him a fan favorite with the Chicago Bears. Michael Dean intervened, running off those who would do his brother harm, and the William Perry we saw Thursday was bright-eyed and all smiles, far different than the one I saw on the sidelines at Clemson a few years ago.

Perry told me he feels better than he has in a long time and that he enjoys following Clemson’s run of success. 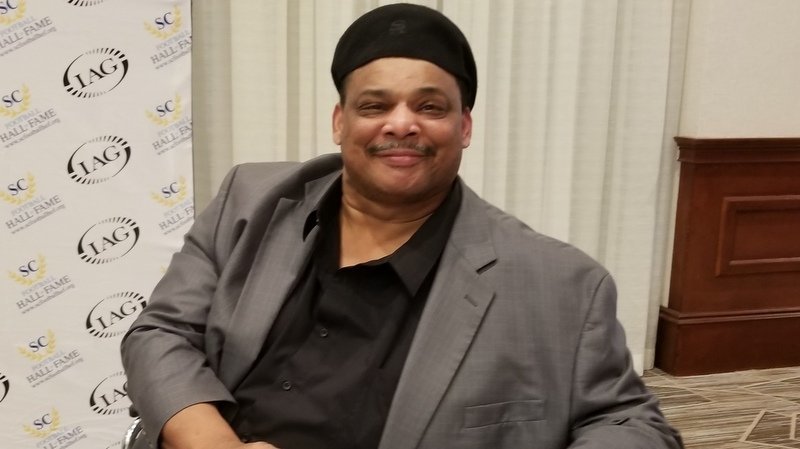 William Perry is all smiles Thursday in Greenville "

“Everything is going well. I'm getting back up, moving around and doing things,” Perry said. “I'm really enjoying myself. Oh, yeah. I'm still following it. I'm still keeping up with it. It's great that they're back playing great ball. You couldn't ask for any more. The only thing they've got to do is just keep it up and have fun. They've been playing really well. You can't say too much about it because they're really handling teams and doing what they want.”

Ford said Perry was a different kind of athlete.

“When he first came to Clemson, he wasn’t quite 300 pounds,” Ford said. “He was maybe 285 or so and he was chiseled. Built really well. He got bigger as he got older but he was still athletic. He was one of if not the biggest player we had at that time. He could do so many things for a man that size. He was just different than anybody else out there.”

Michael Dean said his brother set the stage for players like Christian Wilkins and Dexter Lawrence.

“He was really the first one that was that size that also had that athleticism,” he said. “Nobody had ever seen anything like him. All of these guys today can look at him as the one that got it all started. He could do a backflip off of a diving board and he could dunk a basketball. He was unlike anything anyone had ever seen.”

William laughed when he was asked about his playing days, and said he loves watching Lawrence play.

“I was 6-2, and I played at about 330 or 340 pounds,” he said. “I got a chance to watch him (Lawrence) this year and see what he's doing and see how he's playing. He's been doing well. But he’s bigger than I was, and he’s athletic. That's the way it goes. You think you were big when you were playing and now guys are way bigger than you. It's unbelievable now.

Michael Dean stood to the side watching his brother, pride in his eyes, pleased to see his brother happy again.

William signed autographs and reminisced about a span that saw him win a National Championship, a Super Bowl with the Bears and score one of the most celebrated touchdowns in Super Bowl history.

“Clemson, what stands out is winning the national championship. You can’t ask for any more,” he said. “Then I get to the NFL and win the Super Bowl. You can holler too much about anything. You won your first years and it was enjoyable. I was happy to get in and score a touchdown down there. Those were good times.”

For both Perry brothers, the good times appear to be back.