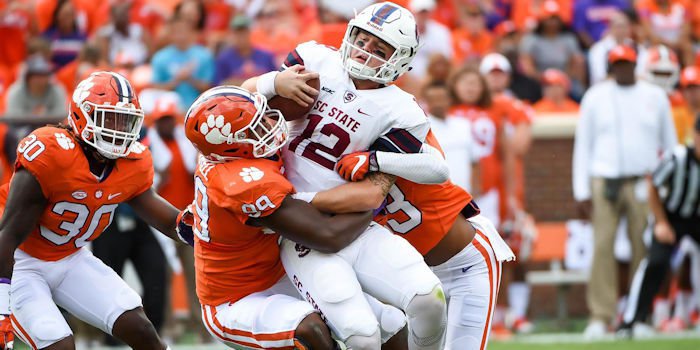 Fifty-nine points in Clemson’s largest margin of victory since defeating SC State 73-7 in 2014.

The Tigers travel to Atlanta to take on Tech Thursday night at 7:30 p.m. in Atlanta, and the Jackets always present problems because of Paul Johnson’s option offense.

"Georgia Tech presents its own challenge,” Venables said. “It's a short week but it's exciting having that challenge sitting in front of us. Two tremendous football teams, Florida State is loaded with a bunch of good players so for Louisville to do that on them just tells you where they are out right now and how well they are playing right now as well."

However, the Tigers had to get past South Carolina State first, and Venables said he was proud of his group’s effort.

“Proud of our guys and how they worked. Came out and were pretty clean,” he said. “I thought we played a bunch of guys and played hard and had good focus. I thought we covered up the gaps pretty good. I thought we fit things up pretty well. I thought that we continued through three weeks to continue to develop our depth to find out what guys can do and not do. We have a tremendous challenge sitting in front of us these next few weeks. Getting ready for Georgia Tech on a short week it was good to not have guys banged up in that first group. We'll be on it first thing in the morning.”

Clemson hasn’t won in Atlanta in 2003, and Venables knows the challenge the Jackets present.

Fifty-nine points in Clemson’s largest margin of victory since defeating SC State 73-7 in 2014."

“Those are all challenges. This game is about recognition and persistence,” he said. “We’re going to have a bunch of guys starting for the first time against Georgia Tech. Going on the road we didn't play great their last time. It's a huge challenge, taking a whole day of repetitions and snaps of practice reps and that’s eighty less than what we’re getting for this preparation. It's tough but we put a little bit of work in fall camp and hopefully that will help us."

Following the game at Tech, the Tigers return home to take on Louisville, 63-20 winners of second-ranked Florida St. Saturday.

“It's going to be a great challenge. But it’s exciting to be able to turn right around and play in five days and its gonna be a lot of fun,” he said. " That (Louisville quarterback Lamar Jackson) will be a whole different animal. That will get here soon enough and we've got to put together a great game plan for these guys this week. That will be another huge challenge after that.”

First up, however, are Paul Johnson and the Jackets, and Venables said Georgia Tech makes enough changes every year to keep defenses honest.

“They have continued to evolve and develop. In principle they are (the same), but they are doing some other things to help them,” he said. “Those things will be new to our guys. Some things yes but other things no. We're going to have to play really, really well. It's another great challenge. It's one thing to say it, see it, talk about it but you actually got to go to do it. You have to play with the discipline of the physical toughness that it takes. In both coverage and in support. It's a huge stress in coverage as well."