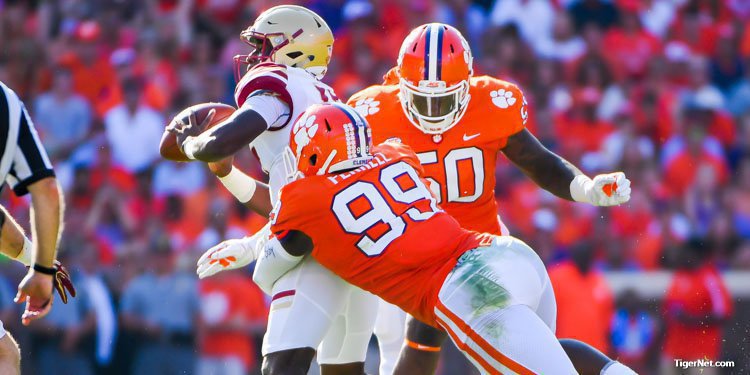 CLEMSON – All of the Clemson fans watching Saturday’s home game against Boston College were uncomfortable, but the heat and the sun weren’t the main culprits. It was the fact that the Tigers and Eagles were tied at 7-7 heading into the fourth quarter.

In other words, it was just what defensive coordinator Brent Venables expected.

“The game went about how I thought it would. Tough. Four quarter game,” Venables said in the postgame interview area. “They play good defense and have a good kicking game. Play ball control offense and have a good quarterback. I thought it would be uncomfortable at some time in the second half and it was. I am really proud of our guys for keeping on fighting and battling and finding a way to win.”

The numbers for the defense weren’t bad – Boston College gained just 238 total yards, averaged 2.9 yards per rush, gained 12 first downs and completed less than 50 percent of their passes. However, the Eagles scored the tying touchdown late in the third quarter, and as the offense continued to sputter and misfire, the defense had to step up and keep the Eagles off the board.

“That’s our expectation,” Venables said. “Again, every week you've got to start over and hopefully you're creating an identity in responding to those tough situations and that's what I told them, 'Don't let everybody else get you to be a Debbie Downer.' There on the sideline, you're doing adjustments and trying to get coached and then you watch on the big screen and something bad happens and the stadium's 'Ohhh,' and it deflates and we need some 'Yeah, let's go!' It needs to bring the best out of you when you face that adversity and I thought today we responded pretty good."

The defense held, and the offense put up 27 fourth-quarter points.

He then said that being “off” in only one facet of the game can lead to games like Saturday’s.

Venables and the defense will go back to work this week in preparation for next week’s game at Virginia Tech, but he sounded like a head coach when he described what he wanted to see this week.

“I thought our fans were great and helped pull us through. We have to get better in the kicking game and on the punt team,” he said. “There are a lot of defensive guys on that unit. We let them flip the field way too often. But I am proud of the way our guys battled and continued to come up with stops when our backs were against the wall. We have a lot to get better on and improve on.”