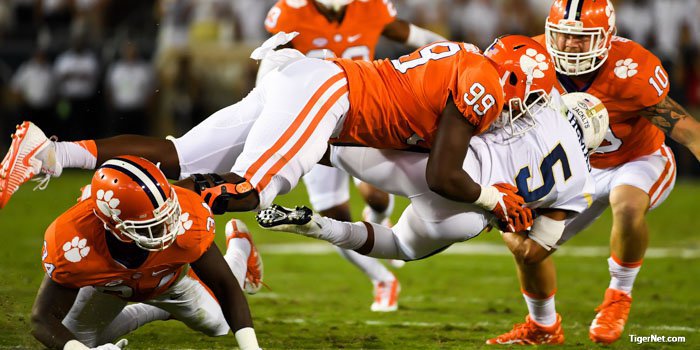 CLEMSON – Brent Venables was all smiles as he stood in Georgia Tech’s weight room following the Tigers’ dominant 26-7 thrashing of the Yellow Jackets.

In Thursday’s win, Clemson held Georgia Tech to just 124 total yards at Bobby Dodd Stadium, the fewest yards the Jackets have gained in Johnson's nine seasons at the helm. The previous low was 155 total yards vs. Iowa in the Orange Bowl in 2010.

Georgia Tech's seven points matched the fewest that it has scored in an ACC game under Johnson.

Linebacker Dorian O’Daniel called the performance a “party in the backfield” but Venables wasn’t ready to gloat over the accomplishment. Why? He knows he has to play the Jackets every year.

"I don't know about that,” Venables said about O’Daniel’s party comment. “Be careful, you have to play these guys again next year. They did a good job, the penetration and quick reads and staying on our feet. For the most part, did a good job. That's a very stressful offense to defend. I'm happy with what I saw out of the secondary and the physicality they showed. Ultimately, if your guys up front aren't disruptive, they're going to have their way with you.

“I thought our guys, Christian (Wilkins) on the first play, kind of set that tone for the night. Real proud of our guys and our scout team guys and our coaches. We're 4-0, have won an ACC game, and broke a streak. It's neat to have our seniors have that as a part of their legacy. Coach Johnson and his staff do a terrific job with their guys. Our guys deserve 24-hours to feel good about themselves."

Venables played the part of scout team quarterback during practice this week, and he said the front four was so dominant in practice he had to beg for time to throw the ball in an effort to test the secondary.

"I told them, ‘Don't cross-face and quit knocking guys back into me.’ I told them to let them lock you, that's hard for them. Otherwise you don't get anything done,” he said. “I know you can make the play and can whoop him. That's actually the conversation. Let me throw and I want to see if the secondary is in good position here. They do a good job too; you have to be able to play your gap. You have to play with discipline. I think Dan (Brooks), Mike (Reed), and Coach (Marion) Hobby do an amazing job getting their guys ready."

Venables was asked if Thursday’s defensive effort was more dominant than 2015, and he smiled and still found room for improvement.

"I don't know. I thought it was two strong performances and I don't want to really compare the two,” he said. “It felt like until the third quarter, how long were we out on the field? (11 minutes) Part of you is fine with them chewing up that clock but it was pretty agonizing too. Big picture, I think our guys had some amazing plays. This game felt tighter than it did last year. Both strong performances I think."

"If a guy is just a runner, he's easy to defend. If a guy is just a passer, little bit easier to defend,” Venables said. “They've got the weapons and a great defense. He can throw it and he can run it. He's very dynamic. They've got what looks like a complete team. He can get himself out of tough situations.

“I'm proud of our guys. This is a completely different planet in terms of a challenge. Teams that win at the line of scrimmage, don't give up explosive plays, win third down, win the turnover battle, you're going to win regardless of the style. Those things will be at a premium. We have to limit their ability to run the ball, but they're swinging it around. It looks like they have incredible balance. We're going to have to play with our 11 guys and play at a high level. Really haven't looked at them. They're doing things different this year and their system is a lot different than what they did a year ago."