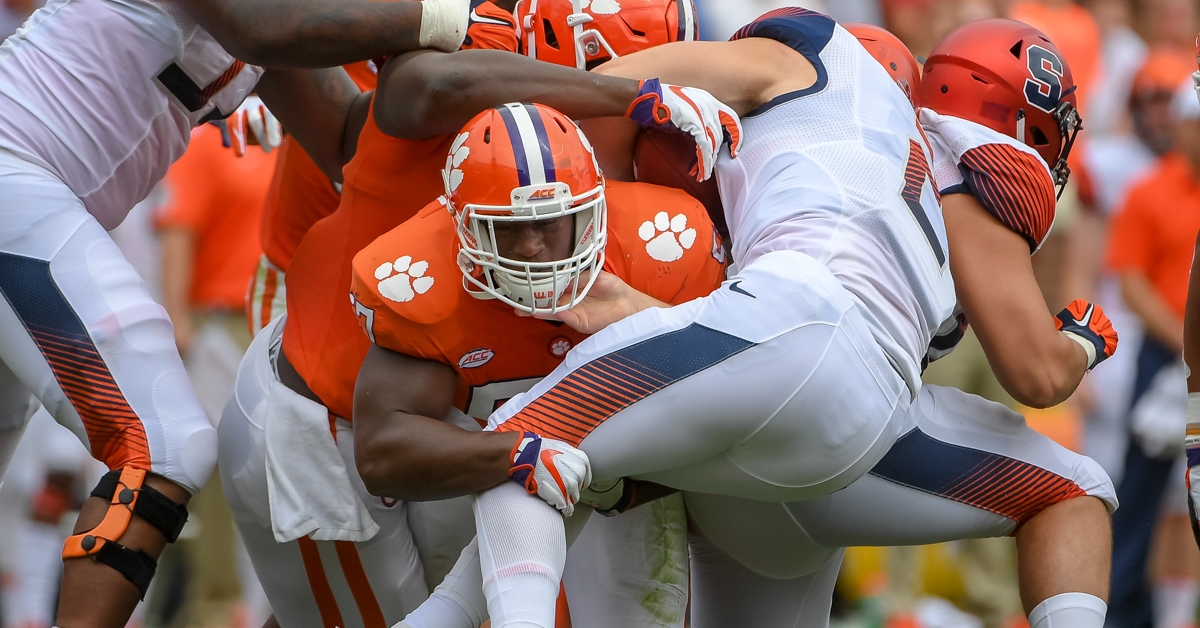 CLEMSON – Syracuse took Clemson to the wire last season but gained just 311 yards on Brent Venables’ Tiger defense. Two years ago in the Carrier Dome is a different story, and Venables knows he will see the best the Orange have to offer Saturday.

Clemson and Syracuse face off at 7:30 p.m. Saturday (ABC) and the teams are heading in different directions. Clemson knocked off No. 12 Texas A&M in dominant fashion while Syracuse was on the bad end of a 63-20 beatdown at Maryland.

A wounded dog is the most dangerous.

"To me right now, against Syracuse, if they're something, they're tough," Venables said. "They'll respond and a wounded dog is the most dangerous dog, to me. They'll come in with a great deal of desperation, toughness, the right kind of mindset coming off their last game."

"They make you defend every patch of grass and they do a great job with their scheme in the run and pass game and their RPOs and then all the exotics and trickery, if you will, that comes off of it," Venables said. "If they've got an arc pass, they've got an arc-and-go. You know, if they've got a jet pass or they got the throwbacks, the double pass ... they'll throw it back to the quarterback ... they do a lot of that really forces you to play with a lot of discipline. A very option like in some of the discipline that it takes and the philosophy that it takes."

The quarterback the last two seasons for Syracuse was the fiery Eric Dungey. He’s been replaced by a calmer Tommy DeVito, who brings a different approach to the game.

“It just is probably a level of playing experience," Venables said. "He's got a big arm, he's athletic, very mobile, stands tall in the pocket, can throw on the run ... there are probably more similarities than there are differences. He's been in the system, so it's not like they just signed him. So he's had experience. I think he, a year ago, had over 100 attempts throwing the ball. Played extensively at North Carolina, Florida State, of course, Notre Dame when Dungey got hurt early in that game. He has played well.

"I know they lost against Maryland but he played well and threw for over 300 yards and threw some terrific balls, they still got really good skill at both receiver and back, and at tight end. So again, I see more similarities than I do differences. He's probably calmer and ... I don't know if poised is the right word ... but as we know, Dungey ... he's like Coach Venables playing quarterback, just with a lot of emotion, wore it on his sleeve. DeVito seems a little calmer in his presence, probably, leadership wise.