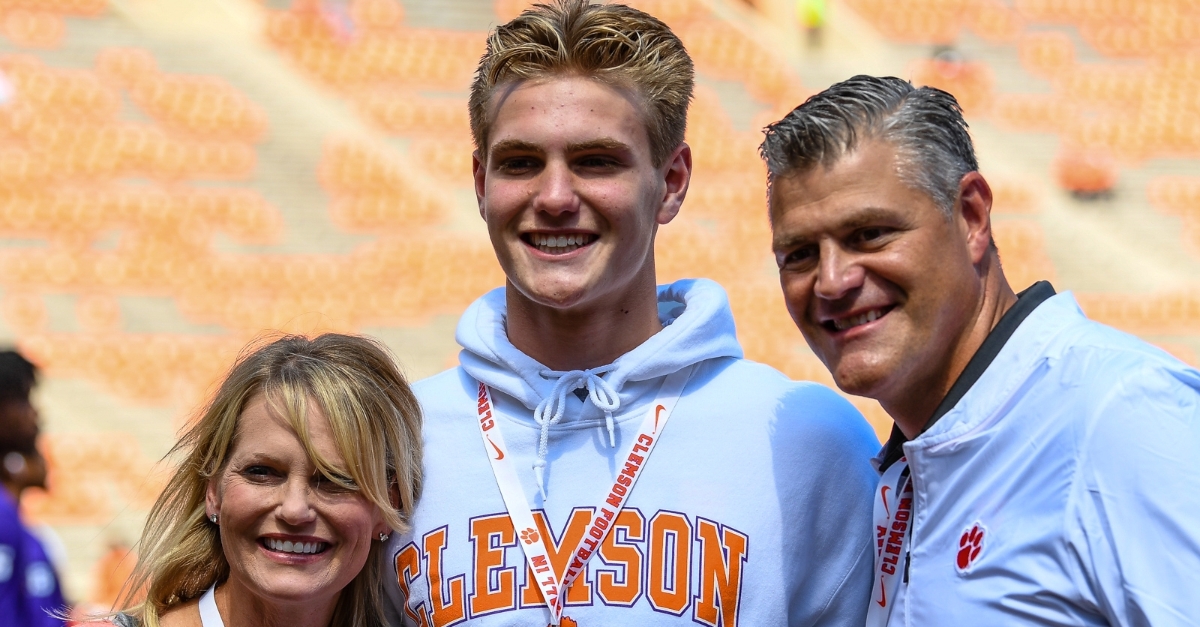 Briningstool poses with his family on the sidelines Saturday

With a trip to Death Valley in the books, the recruiting picture for nation’s top 2021 tight end is becoming clearer.

The experience was everything Briningstool expected.

“That was my first time in Death Valley. I had heard all about it (Clemson's tradition of running down the hill) and how cool it is but to actually see it live was pretty special,” Briningstool told TigerNet Monday evening.

Briningstool and his parents had a packed afternoon in Clemson.

“We drove to Atlanta Friday night and finished up the drive Saturday morning. We got in about 11:00. We ate and hung out with some of the other recruits,” Briningstool said. “We talked to the coaches a little bit as they were coming through and then we went over and watch Tiger Walk. That was pretty cool to see. After Tiger Walk, my family and I went into Coach Swinney's for probably 10 minutes. We just talked and he was telling me how much of a priority I am to the class and how I'm the only tight end they've offered so far and I'm the one they wanted. That was a good conversation. Then, we hung out in the recruiting room for a little bit and we watch the warm-ups. After warmups, they took a couple of us over to the rock and we actually got to watch the team run in from the hill, so that was pretty cool.”

Not only did Briningstool come away impressed with the experience but also the way Clemson handled its SEC foe.

“I thought they did really well,” he said. “The Texas A&M guys - three or four of them - kept going down with cramps and stuff. It speaks volumes to Coach Swinney and how he does camp, how they condition and how ready they are and prepared they are for those types of games. I was impressed with the way they played.”

Briningstool said he is focused on four schools and hopes to make a decision before the season ends.

“Clemson is definitely at the top of my list right now. I would say Clemson, Alabama, Georgia and Ohio State,” said. “Those are probably some of my top schools, but Clemson is definitely near the top. We have a good relationship with most of the coaches over there. I like it a lot”.

The 6-6, 215 prospect’s relationship with tight ends coach Danny Pearman is one of the reasons Clemson sits atop his list.

Briningstool posted 25 catches for 325 yards and a touchdown as a sophomore.