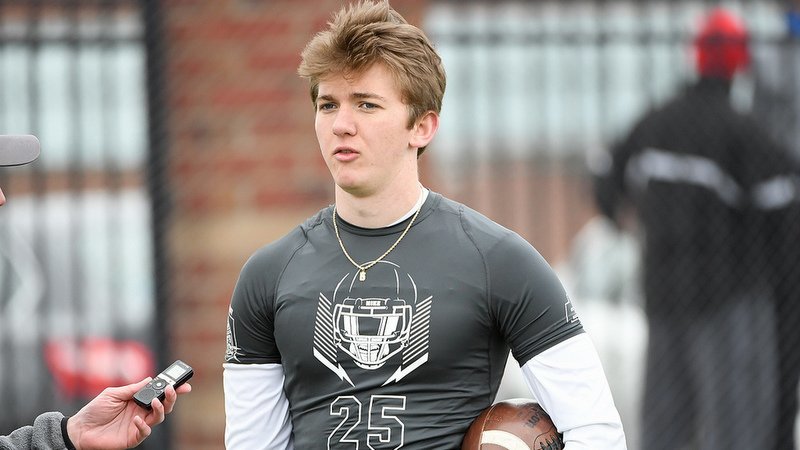 Bailey conducts an interview at The Opening in Atlanta

Although only a sophomore in high school, quarterback Harrison Bailey has accumulated an impressive 21 college offers, including Alabama, Clemson, Georgia, and Florida.

Bailey, a 6-5, 228-pound 2020 prospect out of Marietta (GA) has been described by bleacherreport.com as The 15- year-old Quarterback Who Made Cam Newton’s Jaw Drop

Bailey was able to showcase his skills at the Opening Atlanta Regional, where he talked to TigerNet about his plans for the future and where Clemson stands. Despite the cold weather and roaring wind, Bailey was able to put on an impressive show.

“Yeah, I feel like I went through a little time there where it wasn’t turning out well, but I finished strong,” he said.

Like many other Clemson recruits, Bailey told TigerNet he has been in contact with the coaches quite often.

“I talk to coach (Brandon) Streeter every time,” Bailey said.

His fellow young quarterback Trevor Lawrence, not so much.

“Sunshine? Nah, I think he had to go to class or something,” Bailey said when asked if he had talked to Lawrence during his last visit to Clemson on junior day.

Bailey was impressed by Clemson during his visit three weeks ago and was taken around campus to get an idea of the Clemson lifestyle.

“They have some really, really nice facilities, great coaches, they obviously know what they're talking about, they won the national championship. And they're very loyal to their players, I like that,” he said. “They took us around and showed us what’s new, I knew some of the quarterbacks from like 7v7 and stuff like that, but yeah it was a pretty good visit."

Bailey conducts an interview at The Opening in Atlanta "

Being only a sophomore in high school, Bailey has plenty of time to make a decision, but he says he will start narrowing it down pretty soon.

“Probably in the upcoming five months, maybe, probably sometime in the summer,” he said.

The final decision? That won’t come till much later.

No matter which schools he narrows it down to, the criteria for his final decision has already been decided.

“Definitely coaches, my relationship with the coaches, and then the city and stuff,” Bailey said when asked what the school he chooses will be focused around.