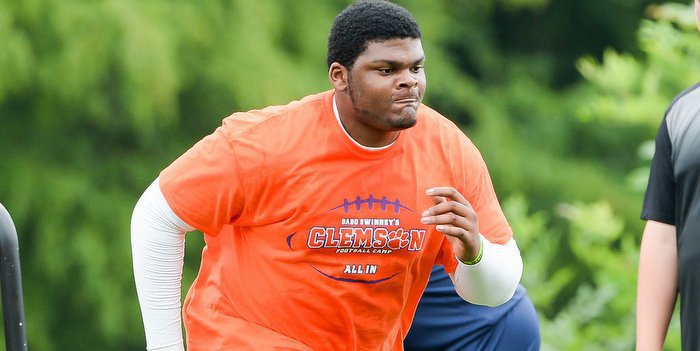 Salyer made the trip back to Clemson's campus Friday

Jamaree Salyer has made plenty of trips to Clemson’s campus, including a visit in January for Elite Junior Day, but Friday’s visit solidified the Tigers’ standing in the 4-star’s top group.

The Atlanta (GA) Pace offensive guard – the No. 9 player in the Rivals 100 and the No. 22 player in the ESPN Jr. 300 – recently released a top five of Georgia, Clemson, Michigan, Florida and Ohio State.

“It was good. I enjoyed it. I just wanted to see how these guys work and get the best feel for the school myself,” Salyer told TigerNet. “I wanted to be able to properly assess the campus. Every time I come up it's always fun and it's always a blessing, so I always have fun.”

While Salyer was one the first to see Clemson’s new Football Operation’s Complex on his visit in January, he said he paid more attention to the details and the planning it took to pull off such a facility.

“It's crazy. I love it. The part that stands out the most is how everything is so organized,” Salyer said. “It's cool to see that they are actually able to plan and build a facility like that, which lets me know the program has a vision and is heading in the right direction. I loved it. The National Championship trophy is pretty cool to see. It's a big honor to win a National Championship. It's great and I'm really proud of those guys.”

Salyer wasn’t the only prospect on campus Friday, as 5-star quarterback commit Trevor Lawrence and 4-star star offensive tackle Max Wray – who de-committed from Georgia on Friday – were also visiting.

Salyer made the trip back to Clemson's campus Friday "

“I talked to Trevor for a little while and I talked to Max as well. Both of those guys seem like they're very interested in the school,” he said. “I'm excited to see what kind of relationship I can build with those guys and how we can expand on it. Trevor is just straightforward. He's not super extroverted. He doesn't talk a whole lot, so it kind of makes sense that he doesn't do a lot of interviews with the media. He's a cool guy.”

The visit didn’t speed up the decision process for Salyer, who hopes to commit sometime after his senior season, but he did say that Clemson will now definitely receive a highly-coveted official visit.

“The visit just kind of solidified that Clemson will get an official visit from me. I'm very comfortable in saying that they have definitely gotten one of the five visits,” he said.

Salyer said he plans to return to campus for the annual Orange and White game on April 8th and then again next fall for a game.