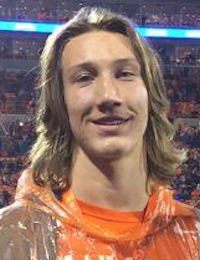 Quarterback
B I O
Considered the No. 1 overall player in the nation by Rivals.com and 247 Sports and the No. 2 player by ESPN.com…unanimous five-star player…National Offensive Player of the Year by USA Today Offensive Player of the Year…first-team Quarterback on USA Today All-American team…top quarterback in the nation and top player from the state of Georgia from Rivals and 247 Sports…No. 2 player in Georgia by ESPN…Gatorade Player of the Year in Georgia in 2016 and 2017…four-year starter at quarterback at Cartersville High School, he began starting in third game of his freshman year and finished 52-2 as starter for his career… led program to a 41-game winning streak at one point…had 14-2 record as a starter in the playoffs over his career…led Cartersville to four region titles, two state titles and three state playoff Final Fours….passed for 13,908 yards during his four-year career and threw for 161 touchdowns…had just 21 interceptions against those 161 touchdown passes…broke state records for passing yards and touchdown passes previously held by Deshaun Watson...in 2017 had 41 touchdown passes and just one interception…in 12 games in 2017 he completed 177 of 256 passes for 3,396 yards, a .700 completion percentage…also had 30-200 rushing and two scores…as a senior led Cartersville to a 52-45 victory over Bartram Trail in a nationally televised game on ESPN …averaged 19.6 yards per completion as a senior…in 2016 as a junior led team to 15-0 record by completing 250 of 406 passes for 3904 yards…threw career high 51 touchdown passes with just nine interceptions… as a sophomore, led team to state title with a 15-0 record by completing 233 of 364 for 3655 yards and 43 touchdowns against just four interceptions…also had 52 rushes for 235 yards and four scores… had four 300-yard passing games in 2015…as a freshman in 2014 began starting with the third game of the season…. for the year was 187-310 for 3053 yards and 26 touchdowns against seven interceptions…two-time state AAAA champion in the state of Georgia…competed in the Elite 11 finals…named an Elite 11 Quarterback…invited to Nike’s annual The Opening in Oregon last summer……first-team All-state in Georgia 4A his last three years…Offensive player of the year and first team AAAA All-State in 2015, 2016 and 2017… wore No. 16 in high school…played at Cartersville High for Joey King…former Clemson football player Kyle Tucker is also an assistant coach on that staff…committed to the Tigers on 12/16/2016…plans to enroll at Clemson on January 8, 2018, just two days after playing in the US Army All-American game…recruited by Brandon Streeter.