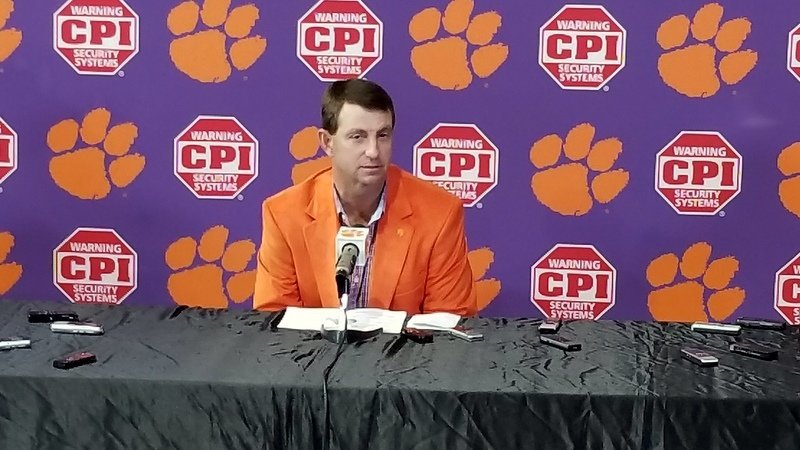 The winner of The Masters each April gets to don the green jacket. The happy head coach of the Clemson Tigers gets to wear a special orange jacket when he reels in a bumper crop of prospects.

Head coach Dabo Swinney walked into the interview area Wednesday afternoon fresh off another top ten recruiting class, and his bright smile was only outdone by the orange jacket he pulled out for the special occasion.

He was a little over ten minutes late to the press conference – he and the staff watched from the new football operations complex as Jackson Carman, the nation’s top-ranked offensive tackle for 2018, chose Clemson over Ohio St. and USC.

Swinney was all smiles as he walked into the indoor practice facility, and as he walked by I noticed the jacket. He looked back at me and said, “It’s an orange jacket kind of day.”

Indeed, it was. In case you missed it, Wednesday was the kind of day when championships are built.

“Christmas came a little early,” Swinney said. “This is exciting; it really is. This is the first time we’ve had an early signing period, and I love it.”

Four of the nation’s top nine ranked recruits are calling Clemson their new home. You read that right – four 5-star recruits that are considered to be among the top nine players in the nation are headed to Clemson.

The Tigers officially signed the nation’s No. 1 offensive player (quarterback Trevor Lawrence) and No. 1 defensive player (defensive end Xavier Thomas) in the 247Sports composite rankings. Lawrence picked Clemson last December and Thomas has been on board since last April.

Carman was the next 5-star to fall, and he was followed by the No. 2 ranked defensive end in KJ Henry.

The Tigers also added four-star back Lyn-J Dixon, a former Tennessee commit, to finish the day with 15 signees. The Tigers have the top player out of five different states with the chance to add a few more pieces between now and February.

"This is going to be our fourth senior class in a row that's leaving as the winningest class in school history. Fourth in a row, this group having won 50 games,” Swinney said. “The key word there is they're leaving. So anytime you have great, successful people leaving your program, it's the lifeline of your program to bring quality people in the front door. I feel like that's what we did today, and we're really excited about it."

While many Clemson fans were fixated on the possible destination of Cade Mays (he picked Georgia), I got a text Monday evening that told me to watch out for Carman. We saw Carman out in Oregon at The Opening in July and spent time with him in September during and after one of his games. We came away with the impression then – from talking to his coaches and people around the school – that he wouldn’t pick Ohio St. I said all along I felt like Clemson and USC were the two that were fighting it out for his services, and that came true Wednesday.

Perhaps the most interesting byproduct of Carman’s decision has been the chatter out of Ohio. For Swinney and company to go into Urban Meyer’s backyard and take away the state’s top prospect is no small feat and it has to rankle everyone associated with the Buckeyes.

Clemson defeated Ohio St. in the 2013 Orange Bowl, walloped the Buckeyes 31-0 in the College Football Playoff last season and followed that up by taking away a prized recruit. Ohio St. has – and rightfully so – prided itself on being one of the top two programs in the country the last few years. Along with Alabama, the Buckeyes have been in the thick of the playoff conversation while dominating on the recruiting trail.

You could make the case that they were second to Alabama, but Clemson might have passed the Buckeyes. Alabama has four playoff appearances, Clemson has three and Ohio St. has two. Clemson and Alabama both have three conference championships, while Ohio St. has two. Total number of wins over the last four seasons? Alabama is 51-5, Clemson is 50-6 and Ohio State 48-6. All three schools have a National Championship during that timeframe.

Yes, the people who have been paying attention know that Clemson sits among the nation’s elite. On New Year’s Day, if the Tigers beat Alabama, Clemson might be rightly regarded as the nation’s best program in college football today.

But win or lose, Clemson is here to stay, at least for the foreseeable future.

I stood in the indoor practice facility a few hours later as Swinney, now decked out in a t-shirt and shorts, danced to AC/DC’s Thunderstruck. I asked one longtime member of the program if they could have foreseen days like today when Swinney first wore an orange jacket back in 2008. He shook his head no, smiled, and said, “None of us could. But he (nodding towards Swinney) did. He has a sixth sense about him.”

He’s taken a sleepy college town in the foothills of South Carolina and turned the football program into a monster. He’s built a recruiting and development behemoth with a family feel and translated those three things into wins on the field. He told me in 2011, “They better get us now. We won’t be easy to get in the future. They better get us now.”

Yes, that monster sleeps no longer. It’s awake and breathing and hungry for more of everything – more wins, more recruits, more titles.

We’re all Thunderstruck, cause it’s an orange jacket kind of day.